Is Dimension secretly making Children of The Corn part IX? 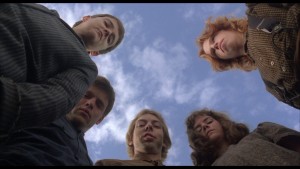 Dimension Films have had a turbulent time with regard to their horror output of late. After hurriedly churning out 2011’s Hellraiser: Revelations in order to (it is widely assumed) keep hold of the ailing franchise and repeating the trick with the upcoming Hellraiser: Judgement, the company have lost the rights to the Halloween franchise and delayed Amityville: The Awakening until 2017. Word is though, that they are now looking at a new instalment of another long-running horror property, Children of The Corn.

Reports are circulating that Dimension are secretly working on a sequel to the 1984 film, which was based on a Stephen King short story. If true, this would be the eighth sequel to the cult favourite, following 2011’s Children of The Corn: Genesis. As nothing is confirmed however, it is anybody’s guess as to whether this new film would be a continuation of the series, a direct sequel to the original or take another approach entirely.

Conflicting rumours put either Joel Soisson (who helmed Genesis) or John Gulagher (Feast, Piranha 3DD) in the director’s chair. Though Dimension have said nothing of the project, it is hardly a stretch to think that they would want to keep hold of the rights to the series as with Hellraiser. If this is happening, does the secrecy indicate that we can expect something more than another lacklustre straight-to-video sequel? Will Isaac return again? Will He Who Walks Behind The Rows be realised more fully than ever before? Whatever the deal, this is a story we’ll be keeping an eye on.