In 1983, Stephen King published a novel about an evil autonomous car, which was turned into a movie later that year. Christine was released to modest acclaim, but became a cult classic for fans of horror and classic cars. This is because Christine, the name of the red 1958 Plymouth Fury used in the film, is considered the quintessential vehicle in the horror canon. Although Christine is iconic, other horror movie cars deserve our attention. It can be argued that these cars are just as scary, if not scarier, than that furious Plymouth Fury. 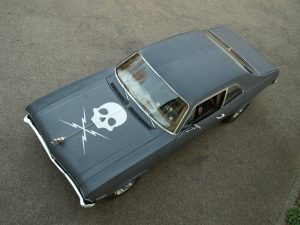 This classic muscle car appeared in the Tarantino movie Death Proof, which, along with Robert Rodriguez’s Planet Terror, was released in 2007 as a double feature called Grindhouse. Painted all back save for the white skull and lightning bolts that affix the hood, the 1970 Nova is owned by stuntman turned serial killer Mike McKay, who is played by Kurt Russell. Throughout the film, Mike uses the stunt car to murder young women in staged car accidents. While the Nova is most often associated with Death Proof, it is actually one of two cars used by Mike in the movie. The other is a 1969 Dodge Charger.

Death Proof’s Nova is certainly intimidating, but it’s not supernatural like Christine… or the 1971 Lincoln from The Car. This underlooked 1977 horror movie features a demon-possessed Lincoln Continental Mark III that terrorizes residents of a small desert town. Though the film wasn’t particularly well-received, it probably turned more than a few Lincoln enthusiasts away from their favorite vehicle model. At least they have many alternatives with which to replace the Mark III. 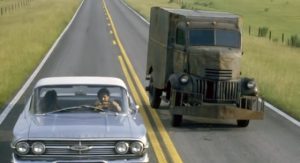 This last challenger for Christine’s crown is a truck, not a car. However, it qualifies on terror alone. This 1941 Chevy COE is driven by a monster called The Creeper in the 2001 film Jeepers Creepers. The Creeper patrols back roads in this ancient rusty truck looking for humans to consume. Although the truck is creepy on its own, its Lovecraftian passenger helps elevate it to a level of frightfulness not reached by most movie vehicles. The COE in the truck’s name means “Cab Over Engine,” which is a body style wherein the cab sits above the engine rather than behind it. This puts The Creeper in a position of power and closeness that wouldn’t be achieved if he were in a different vehicle. Although the cab was stock, filmmakers decided to add a distressed box, cow catcher, and shortened the wheelbase to make the truck even more intimidating.

Is Christine the scariest horror movie car? It’s certainly high on the list, but there are many deserving candidates for the top spot. Death Proof’s 1970 Chevrolet Nova, The Car’s 1971 Lincoln Continental Mark III, and Jeepers Creepers’ 1941 Chevy COE are just a few horror movie vehicles that can give Christine a run for her money.