Is Angelina Jolie Going to be The Bride of Frankenstein? 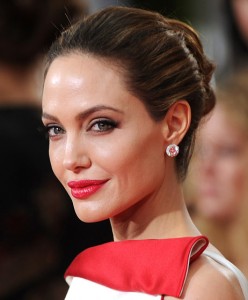 The question on everybody’s – well some people’s – lips is whether Angelina Jolie is going to be the Bride of Frankenstein. An article written by The Hollywood Reporter stated that the A-list star would be the lead in Universal’s planned reboot of The Bride of Frankenstein, “Even if Universal loses tens of millions of dollars on ‘By the Sea,’ […] she will be amenable to starring in its tentpole ‘Bride of Frankenstein’ from producer Brian Grazer”.

We do not have confirmation as to whether this is true and if Jolie passes on bringing the Bride to life, she may be sought after to reprise her role in a sequel to Wanted. Personally, we think that Jolie would be great as the Bride. She definitely has the physicality for it and it’s easy to picture her with the iconic hair and wide-eyed expression.

It will be interesting to see who Universal choose as the writer and director for this picture, as that will prove as important as casting the leading lady. Alex Kurtzman and Chris Morgan have been producing Universal’s planned Avengers-style monster universe since it was announced in 2013. So far, Kurtzman is directing The Mummy with a script from Jon Spaihts which is to be released on 24th March 2017 and then there is an Untitled Feature coming in 2018. Noah Hawley – the executive producer of TV series Fargo – is writing a script for an unknown monstrous reboot and Aaron Guzikowski (Prisoners) is the scribe behind The Wolfman.

It seems that slowly, but surely, the Universal monster world is coming together and as long as they’re an improvement on Dracula Untold, we’re excited to see how they all pan out.