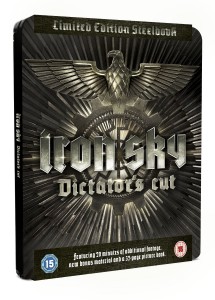 The conceptual foundations of Iron Sky make for one of the single most outrageously absurd storylines to have ever found its way onto the big screen. Even just watching a short trailer makes it clear this is complete bonkers. Released first in 2012, Iron Sky is gearing up to unleash its extended director’s cut or, more fittingly, ‘Dictator’s Cut’.

This version boasts that it’s “an all-new take on the film” and it features new visual effects and 20 minutes of extra footage. It will be available as a rather appealing limited edition Blu-ray steelbook (on sale from February 10th) and it will be shown at the Prince Charles Cinema in London’s Leicester Square on February 1st at 6:00pm. The steelbook has a unique embossed collector’s casing, 32-page colour booklet and a 75-minute making-of featurette. Tickets to the screening cost £13.50 (£11.00 for members) and can be London’s Prince Charles Cinema – the event will include special autograph opportunities, exclusive posters and the chance to purchase signed copies of the Blu-ray.

Vuorensola will be in attendance at the event, hosted by Film4 FrightFest and 4Digital Media, as will producer Tero Kaukomaa. Following the screening there’ll be a Q&A session with both of them and attendees will have the chance to purchase signed copies of the steelbook ahead of its UK release.

FrightFest co-director Ian Rattray adds, “FrightFest are very pleased to be co-hosting this event with 4Digital Media. We know our fans will love this event and it’s always a pleasure to be back at the Prince Charles Cinema – FrightFest’s spiritual home.”

The steelbook, DVD and Blu-ray of the Dictator’s Cut are available from Amazon.

In 1945 the Nazis flew to the Dark Side of the Moon, and established a secret hideout, where they’ve been preparing for their grand return. The year is 2018, and the Americans return to the Moon in search for powerful energy source, Helium-3. They end up landing too close to the secret Nazi fortress, and although the big Nazi weapon “Götterdämmerung” is not yet ready to be deployed, soon the skies are full of iron, as the Nazi war machines take a pre-emptive move against threat from Earth.

The DICTATOR’S CUT of Iron Sky is an all-new take on the film, following the original vision of the director Timo Vuorensola. This version is 20 minutes longer, loaded with new visual effects, new music from Laibach – and, of course, tons of new, politically incorrect humour.

The 75 minute Making of Iron Sky

The Story (Timo Vuorensola, Samuli Torssonen and the script writer Johanna Sinisalo explain the background of the original story of Iron Sky)

Shooting Nazis (Timo Vuorensola and cinematographer Mika Orasmaa explain the details of the actual shooting of the Iron Sky. Samuli Torssonen tells about the shoot from VFX point of view and actors explain their experiences acting in a green screen studio.)