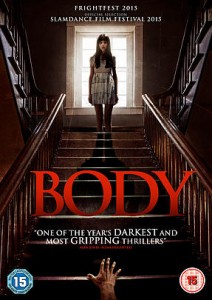 It’s all fun and games until there’s a body at the bottom of the stairs, am I right? That’s the pickle a trio of girls are faced with in the horror-thriller body, after they break in to an empty mansion.

Thanks to Maven Publicity, we have 4 new clips from the film which will soon be shown at FrightFest. The clips show the girls entering the home and having some fun, before a man is pushed down the stairs. We don’t know who it is or what led to the supposed ‘accident’, but I guess we’ll have to watch the film to find out.

Synopsis:
An idyllic Christmas holiday turns deadly when best friends Holly, Cali and Mel break into a local mansion they believe to be unoccupied. But they quickly realise they’re not alone in the house and in a moment of panic become embroiled in a grisly murder. The three girls self-destruct as they try and figure out what to do with the dead body in the living room.

Body comes from directors Dan Berk and Robert Olsen, marking their feature film debut. It stars Helen Rogers, Alexandra Turshen, Lauren Molina and Larry Fasenden. You can also check out the trailer below; it’s one hell of a roller-coaster and shows the girls in a mighty fine predicament.

Be sure to catch Body at FrightFest on Fridy 28th August or purchase the DVD on 31st August 2015.