Since making his feature debut appearance at the ripe old age of 15 alongside Brad Pitt, Jessica Chastain and Sean Penn in Terrence Malick’s experimental, impressionistic drama The Tree of Life, there’s been absolutely no stopping one of Hollywood’s now most sought after actors, Tye Sheridan. 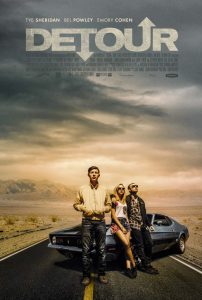 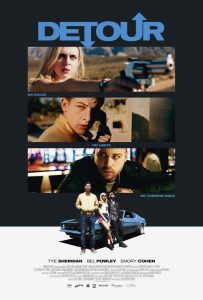 A cunningly structured tale of deception and murder, Detour sees Sheridan play Harper, an outwardly credulous law student who can’t shake his suspicions that his stepfather had something to do with a car crash that left his mother in a coma. Hitting the bars to drown away his sorrows he strikes up a candid conversation with a shady character only to find himself unwittingly entering into a pact to “take care” of his stepfather.

With Detour releasing in the U.S. this Friday, 20th January, before going on to screen as part of this year’s FrightFest Glasgow lineup, we caught up with Sheridan to discuss tackling what is by far his most adult role to date…

SCREAM: I think what really piqued your interest when you read the script for Detour was the fact that it reached your hands at a moment in your career where you were keen to take on a more mature role.

Tye Sheridan: Absolutely. At the time when I read it, it was definitely the most adult role I’d ever taken on. That was something I had been consciously looking for but I didn’t know where it was going to come from but then I read this and it just seemed the natural choice to make.

SCREAM: Without giving too much away, I think we can get away with revealing there’s a split narrative in the film. From an actor’s perspective, how did you approach the role of Harper in terms of playing the same character in two parallel storylines?

TS: For me, that’s by far the smartest element to the film and that’s what really made me want to do it. I also loved the “reveal” at the end – I say reveal as I don’t know if I would really call it a twist. I’d never been a part of something that was as strong and suave and cool as this and I love Chris Smith so I really wanted to be a part of his movie.

SCREAM: So you were well-versed in Christopher Smith’s output before taking on the role?

TS: Yeah. I really enjoyed Triangle and I guess it’s similar in the sort of story structure. And after I watched that and had read the Detour script, I knew that he was the guy to make this film.

SCREAM: And was Chris a stickler in terms of how he wanted everything to play out, particularly given the film’s intricate structure?

TS: We had to deal with all these crazy technicalities because it had to be shot in a very specific way and you had to keep everything in mind while you were shooting. For the story to work later and integrate itself with this split narrative and the reveal there were so many things you had to think about. The whole thing had to be so astutely executed to make sure the two ends come together well. And Chris was so good about all of that, as was everyone else involved.

SCREAM: Emory Cohen, who plays Johnny Ray in the film, was cast literally days before you began shooting. Did that give rise to any last minute problems in terms of preparation and rehearsing?

TS: No, not at all. I loved this movie so much and I trusted Chris so I knew that we would get someone great for Johnny Ray’s role. I flew to South Africa about two weeks before the shoot and we still hadn’t figured out who was going to be playing the role so we all kind of took the leap and hoped that we would get someone great. We knew that Emory was available and that he was our number one guy and then when we got him he showed up a couple of days before shooting and we were all just thrown into it together. So we didn’t have much time to think about it at all but I really don’t think it affected the shooting. If anything, I think it made everything greater. We ended up having to figure each other out in real life whilst the characters in the film are figuring each other out on the screen.

SCREAM: Although we first meet Johnny Ray as this seemingly thick-skinned, resolute ruffian, the film gradually reveals how all of that is a front and Emory really taps into the more sensitive and scared side of the character. In a recent interview he mentioned how he saw the character as a family man trying to keep his family together and that he saw similarities with the likes of Denzel Washington’s character in Training Day, Jack Nicholson in Five Easy Pieces right through to King Lear.

TS: That’s why he does such a great job in this role. If you meet Emory in person – and he’d probably kill me if he knew I was telling you this – but he’s really just a sweet momma’s boy from New York. But he comes off as this really tough guy and that’s what he brings to this role. He was very conscious of that when he came into it and when you see it on screen it’s amazing. There’s one specific scene where he’s with a character he owes money to and you’re seeing Emory like a child sitting there in front of John Lynch and your heart just goes out to him.

SCREAM: There are a lot of hidden emotions which are all progressively released throughout the movie. Did you feel the need to map some of that out with your co-stars before actually going on set or was it more a case of, like you said earlier, figuring each other out as everything unfolded?

TS: No, I didn’t feel the need to discuss it. Emory works harder than anyone I’ve ever met. All he thinks about is his work. When he first showed up he was really nervous because he only had a couple of days to really prep. When I first met the guy I could see that he could definitely play the role but then the first scene that we had together was a scene where he turns up on my doorstep and says, “Alright, you’re going to pay me and we’re going to go to Vegas now.” and I can remember in that very first take that he scared me so, so bad. He was just so intense and I couldn’t look him in the eyes and he just blew me away.

SCREAM: With you having more than proved yourself in a much more mature role now, what does the future hold or what kind of roles would you like to see yourself tackling some time soon?

TS: I’m just always looking to do the best thing that hasn’t been done before and I think that when any artist has the opportunity to do so you just jump on it. I do have some stuff that I’ve worked on over the past year or two which I’m really, really passionate about – as I am with all my projects – so hopefully things will just keep getting better and good content keeps coming my way.

We thank Tye Sheridan for talking to SCREAM and strongly suggest you check out Detour when it releases in the US this Friday, 20th January, before it goes on to screen as part of this year’s FrightFest Glasgow lineup.

Watch this space as we also have an interview with the film’s writer/director Christopher Smith coming your way very soon. For the time being though, we’ll leave you with the latest trailer courtesy of Magnolia Pictures and Magnet Releasing.