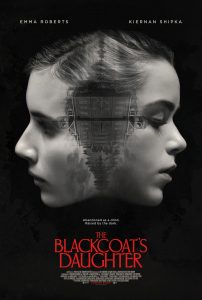 Many of you are likely more than aware of actor-turned-director Osgood Perkins (son of Anthony), following the recent success of his Netflix Originals flick I Am the Pretty Thing That Lives in the House. But, despite all the buzz his previous film, The Blackcoat’s Daughter garnered on the festival circuit, only now is his directorial debut getting the wider release it long deserved.

Penned by Perkins and starring an absolutely committed cast headed up by the three leading ladies, Emma Roberts, Kiernan Shipka and Lucy Boynton, The Blackcoat’s Daughter tells the chillingly atmospheric and unsettling tale of Kat (Shipka) and Rose (Boynton), two young girls who find themselves pitted against a mysterious evil when their parents inexplicably fail to come pick them up when their prestigious Catholic boarding school closes its doors for the winter holidays.

To celebrate the impending release of the film, SCREAM’s Howard Gorman caught up with Perkins to discuss the implications of releasing his debut on the wave of the success of his sophomore effort and how surrounding himself with women, both in front of and behind the camera, added an additional layer of sophistication to the film…

SCREAM: The film’s official release has been a long time coming. Not only has it taken the best part of two years for the film to get released after its festival run, but the project, as a whole, dates back the best part of a decade.

Osgood Perkins: Well I wrote a spec script that was looking for a home and I did manage to find enthusiastic and collaborative producers early on, but due to the nature of the non-linear/non-obvious nature of the screenplay, it was hard to pull money together for a first time director – I’d never done any music videos or commercials or anything like that. This was my first thing ever so a lot of faith had to be advanced for me to be able to make the movie at all. Once we got actresses attached, it did become a lot easier to finance.

And then, making it is as hard as making any first film when it’s 40 degrees below zero in Canada. That was NOT an easy thing to do but we did it and then got to show the film at Toronto and it just had a few unfortunate contractual delays here and there but the movie has never been changed at all. 100% of what was written was shot so I’m very happy about that fact.

SCREAM: When you wrote the script, I don’t think you had any hankerings to actually direct it. What/who changed your mind? I think Bryan Bertino may have twisted your arm?

Oz: That decision happened pretty early on. Bryan and his partner, Adrienne Biddle, were the people who were the first ones in love with the script and they wanted to make it with Bryan initially going to direct. In time, it became very clear to them that I really felt this film on a cellular level and, as I had authored it, they thought I should really go the distance with it. Of course, I was flattered and excited and it all worked out. 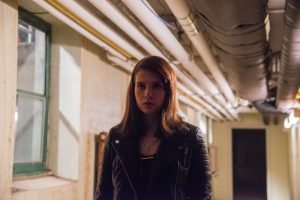 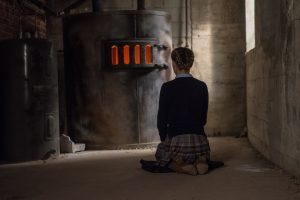 SCREAM: You’ve often said that the film is semi-autobiographical. What personal experiences did you draw from?

Oz: Part of what you see in the movie is the quality of timing and how things come around and how you’re ready when you’re ready. It was very do or die for me. I hadn’t done anything before and I didn’t know what I was going to do after so I really was fully-invested in making it happen, in instilling a very powerful feeling and a REALLY scary one. The lead up and the financing, the very, very short prep schedule was really quite terrifying and anxiety was so high during all of that. But you settle into it, and once it caught on, the people around me were so attentive and so connected and in rhythm and we even finished a day early.

SCREAM: You were adamant to bring in as many women as possible to work both in front of and behind the camera. One particular example is your cinematographer Julie Kirkwood.

Oz: I just felt that what I had written was so feminine that it would have felt so weird to be with another guy on set. I didn’t think that a guy and I were going to be able to capture all the feminine sensitive nature of all that was happening. It might sound facile to say that but it really isn’t. The difference between men and women, when it comes to sensitivity and tension, really couldn’t be more different. So, to have Julie watching the women in the movie with me just seemed like good business for me. I felt I was going to be portraying a more sophisticated film. Women are more sophisticated than men so I just wanted an extra layer of sophistication to make sure my horror movie really came off like a horror.

And the script described the aesthetic I wanted and Julie happened to understand ALL of it. We have the same tastes and like the same things. We like to see the backs of people’s heads and we like a lot of headroom in the frame. It was just one of those really harmonious relationships where the tone and the feeling was on the page and then she was able to really just find it the way she did.

SCREAM: There’s still some humanistic horror running through your veins that you want to get out of your system. I read you’ve been writing another horror script but this might be the last genre movie you’re interested in doing for the time being.

Oz: That’s right. I’ve finished my third script in the cycle of these horror movies but I don’t think I’m going to do any more horror movies after these for a while. I’d like to change my tack I think but we’re trying to set this third movie up right now. I guess every new film feels more ambitious than the last but this one definitely feels more ambitious that the first two I’ve done. I can tell you that it’s called Medusa, it takes place in the ’50s and it’s in black and white. It’s a sort of synthesis of the two films I’ve done so far and it really reaches farther than those two and I really hope I get lucky enough to actually get to make it soon.

A24 and DirecTV will release THE BLACKCOAT’S DAUGHTER in theaters and On Demand March 31, 2017. In the meanwhile, we’ll leave you with the film’s trailer below that I’m confident will give you the absolute chills.