The names Vincent Masciale and Luke Barnett will probably ring a bell for Funny or Die fans thanks to the duo’s viral parody videos such as “A Game of Thrones Halloween” and “The Walking Fred.” Whilst staying true to their comedy roots, serving up plenty of laughs in this, their feature debut, Fear, Inc., the film doesn’t hold back on the scares, providing a satisfyingly sinister spin on pretty much every horror movie you could think of. 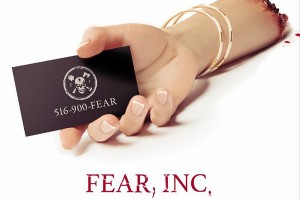 Already being hyped as Scream for the new generation, Fear, Inc. relates the tale of Joe, the ultimate horror hound who, no matter how hard he tries, just doesn’t find anything scary enough anymore. Cue a shady character who promptly hands him a business card offering exactly what he’s looking for: a tailor-made terror package promising to bring all of his greatest fears to life. What could go wrong, right?

With Fear. Inc. having screened at TriBeCa Film Festival this year, SCREAM caught up with leading couple, Lucas Neff and Caitlin Stasey, to talk all about making a horror nerd’s dreams come true and perfecting their deftness in dupery…

SCREAM: Lucas, how did you land the role as Joe and are you as big of a horror nerd as the character is or were a few slasher movie binge-watching sessions required?

Lucas Neff: I just met with the director, Vince, and the writer, Luke, and we just hit it off. I really enjoyed the script and just thought it would be a really fun thing to do. I’m not a big horror movie buff so it was a little out of my realm of expertise in terms of film knowledge. But, through shooting the movie, I got way more familiar with things. There was a sort of horror movie marathon playing on TV while we were shooting so I was binging a lot of things like Scream, Friday the 13th; a lot of old classics and some newer stuff too. It was pretty simple though. It didn’t feed in too much to what I was doing as an actor I don’t think.

SCREAM: So if honing into horror movies wasn’t too much of a challenge, what would you say you found most overwhelming?

Lucas Neff: I think the most overwhelming part of it was the fact that when you make a horror movie it’s all night shoots. Basically you’re working from 6pm ‘till 6am every night and so you do just start to slowly go crazy from sleep deprivation. And then, of course, the screaming and dying constantly. It was like slowly dying over the course of several weeks. But, other than that, making movies is so fun.[laughs] 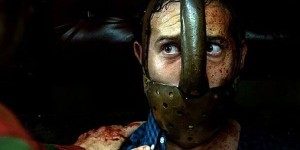 SCREAM: You both actually live together so Caitlin, did you try and maybe distance yourself a bit from Lucas to try and forge more authenticity in terms of the deception required in the film?

Caitlin Stasey: Well we didn’t really have time to rehearse. Lucas and I obviously live together so we just sort of went home and cried and went to bed because we were just so tired. Fortunately, we’re very good actors so we were able to suspend belief the entire time [laughs]. But no, there weren’t really any rehearsals. It was just on the day, which always lends itself to an element of surprise, and Lucas is a great improviser and Luke and Vince had a great vision so they didn’t really need too much from us to be honest.

SCREAM: Fear, Inc. is a blatantly self-aware homage to The Game. Were you both familiar with David Fincher’s film beforehand?

Lucas: I’d seen it a long time ago. I remembered the basic premise but I couldn’t tell you the ins and outs of the film blow by blow. But the great thing about making this movie is that the characters are also sort of clueless as to what’s happening so it was more important about embracing the immediate moment that’s happening to the characters as opposed to some encyclopaedic knowledge of everything that’s implied or being referenced. It was more important about trying to have fun and be truthful in the moment that’s occurring.

SCREAM: Was it tough, from an actor’s perspective, to get this self-awareness/satirical balance just right? It’s so easy for satires to get written off as rip-offs or for being too spoofy.

Lucas Neff: Definitely, but I think that the second we mention in the film what it is that we’re parodying it’s less of a rip-off and more of a fun homage. And I think we’re probably in the most self-aware era of film-making that’s ever existed so I think that’s a thing that audiences are fairly comfortable with at this time: referencing pop culture, referencing other media. I don’t think it’s as much about striking a balance as it is about being clearly honest throughout the whole film about what we’re referencing and why and just having fun with it. Also I think the film doesn’t take itself too seriously, except for the moments where it needs to. I think the whole point is that you try not to worry about that stuff. It’s more about making a story that you’re passionate about and then have as much fun making it as possible while you try to make it as enjoyable for the audience later on. I think the whole team was really committed to that prospect and we’re all very proud of the film that ended up on the screen as a result.

The line between rip-off and homage is that a rip-off tries to pretend that it’s original; it tries to pretend that it invented the wheel entirely. We have a whole new product that is different, but every reference, everything that we use, everything that we have been inspired by, we very honestly tell the audience, “Look, it’s just like this.” And I think that’s what makes it a fun thing for everybody. 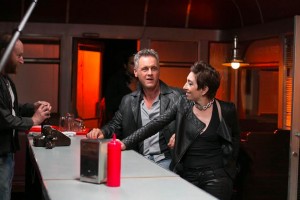 SCREAM: Did Luke and/or Vince try and mix things up by playing any actual tricks on the cast or crew?

Lucas Neff: I think the only trick they played was on themselves when they decided to make a movie with a 15-day night-shoot for pocket change. The greatest trick any filmmaker plays is on themselves trying to make a film.

SCREAM: You’re promoting this right now but is there anything you’re able and willing to share about future projects?

Lucas Neff: I shot a pilot for ABC called Downward Dog. I got to work with Allison Tolman from Fargo, who is brilliant, Barry Rothbart who is a hilarious stand-up comedian and Kirby Howell-Baptiste who is also a brilliant comedian. It’s a really great pilot. I would love to see it get on the air and I feel really confident about its prospects.

My wife and I, Caitlin, are developing a TV show with FOX together too. It’s very early in the development process but we’re super excited about that.

Caitlin Stasey: And then I just finished filming a pilot for FOX called A.P.B. and literally wrapped last week. I’m not returning to Reign any time soon and that’s kind of it for the future right now with us writing and hanging out.

SCREAM: Are you still up for some more horror movies, Caitlin?

Caitlin Stasey: I think I could probably sit out for a while now. They’re very gruelling. There’s a problem with horror films in that generally – although not so much in this one ,which I’m really grateful for – when you’re a woman in horror you’re getting raped or you’re getting beaten up. I’d done so many films where I’d just scream and cry and get chased but then in this one there was a very minimum of that; Lindsey’s not as helpless as we think she is! But yeah, for now I feel that I’ve done enough for a while….

We’d like to thank Caitlin and Lucas for talking to SCREAM and we hope to be able to bring news of a confirmed release date some time soon.