INTERVIEW: Ki Hong Lee Opens the Lid on Wish Upon 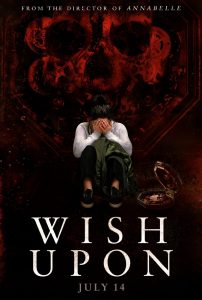 The horror genre is certainly going through a bit of a “careful what you wish for” phase right now. This August, streaming giant Netflix will unleash Adam Wingard’s highly-anticipated Death Note, but prior to that, John R. Leonetti’s Wish Upon will be granting all manner of wicked wishes in theatres from July 14.

Ahead of the film’s release, SCREAM sat down with Ki Hong Lee to find out what it was about Wish Upon that drew him to the horror realm for the first time and his experiences working with James Wan’s long time cohort, helmer John R. Leonetti…

SCREAM: Horror is fairly new territory for you. You are in The Maze Runner franchise that has the odd horror moment but what was it about Wish Upon that tempted you to take a role in the pure horror realm?

Ki Hong Lee: The horror genre was definitely something that was on my bucket list and I had the opportunity to audition for John R. Leonetti and I realised very quickly that he is such a genuinely nice, positive vibe kind of person. Then I found out that Joey King was going to be part of it and the rest was history. Joey’s been acting for so long and getting a chance to work with her on this movie has been a blast and having John at the helm has been a tremendously positive experience for me and he’s inspired me to be the person that he was both on and off set. In a lot of ways I grew as an actor but also personally as well in terms of the kind of person I want to be when I get older. You need a director who is very clear in his vision and John creates an atmosphere of love. As an actor, I was just trying so many different things and he would always come up to me either with praise or with critique and it’s all about feeling safe in that environment and John was able to do that so the take home thing for me was that you’ve got to be a director that really cares and is passionate about their actors and their vision of the story.

SCREAM: I take it then that he was very open to allowing actors to voice their ideas and suggestions?

Absolutely. Right from the get go. He gave me a call well before the shoot to share our thoughts to make sure we were both on the same page – from the character traits right down to the wardrobe. We were very meticulous and careful about how we were going to craft this character and that’s something you want in a director so I was very lucky to have that.

SCREAM: You play a high school student although you left your schooling days behind a good few years ago. What was it like going back to school?

When I’m in an environment with younger actors and that young energy, there’s a different energy that you feed into. That helps tremendously because you forget sometimes. You start asking, “Oh. What was I like in high school?” But, you know what? I don’t even know what I was like last month so it’s all about meticulous note taking and harking back to memories, looking at pictures and looking at old yearbook photos to figure out what I was like. I would also borrow from my cast mates to help me remember what it was like to be in that mindset. It also helps to have a tremendously talented co-star. Most of my scenes are with Joey so to play off of her and what she brought to the table helped tremendously.

SCREAM: Your character is Joey’s voice of reason in the film and you help decipher what this music box really is. Did that involve much preparation in terms of creating the rapport between the two of you with you playing almost a kind of father figure trying to stop her from going down this dark rabbit hole? 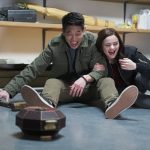 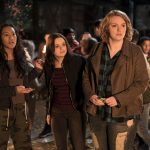 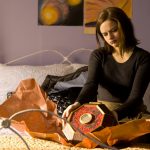 There wasn’t a lot of time to spend with Joey off set but I think it speaks to what a professional Joey is in that you could just show up on set, even if it’s just 20 minutes of talking to her before shooting a take, to really break it down. She’s done the homework of her character and I’ve done the homework of my character and we show up to set with our own ideas and we decide what we agree on and then we play it. John gave us the opportunity to do that and it was a really collaborative experience and I’m really glad that I had someone like Joey to act against.

SCREAM: The film tackles the subject of bullying. Obviously, this is a horror fantasy movie but subject matter like that has to be tackled with due care and respect, something which Wish Upon does in spades.

This movie could have been easily a movie about a selfish girl who just wishes for certain things and people die all these horrible deaths but you have that one element of how hard it is to be at high school these days. It’s especially the case with social media and cell phones and everything that they have to deal with. Even touching upon that in a couple of scenes I think will help ground the movie and be relatable to the current demographic that goes to watch these sort of movies and I think that there’s something to be learned about their world. I think this day and age is the hardest to live in as a millennial growing up with so many different points of views that are readily accessible and all this information that can be consumed so easily because of the internet. It’s a very strange and challenging time that we live in, especially for a young millennial growing up.

SCREAM: The film’s got a PG-13 rating although you have commented that you would have preferred a 17 yourself, but it’s still pretty horrific all the same.

Well I’ve got to process this by saying that I am a big wuss when it comes to horror movies so, for me, it certainly feels stronger than a PG-13 movie but again, I’m a big wuss and the rating is what it is so people will have different things to take away from it than I do. It just depends on your comfort level and how scared you get.

Wish Upon will be granting wishes in theatres from July 14.