Themes of religion and belief have been a horror fiction staple for generations. There’s something wickedly appealing about them, whether it be exploring the workings of a cult, watching innocents flirt with the dark side of religion, or the most common trope of them all, demonic possession. And whilst it’s a sub-genre that’s been around longer than most, filmmakers never cease to surprise us with fresh new spins. The last five years alone has been huge for religious horror with the release of instant “cult” classics such as Robert Eggers The VVitch, Ari Aster’s Hereditary and Rose Glass’ soon-to-be-released Saint Maud.

The same can also be said for this week’s release, Darren Lynn Bousman’s ‘Death of Me’ which intertwines time-honoured beliefs with state-of-of-the-art technology to provide a fresh and fascinating take on religious terror tropes. Starring Maggie Q (Fantasy Island, “Stalker), Luke Hemsworth (“Westworld”, Infini) and Alex Essoe (Starry Eyes, Doctor Sleep), the film follows a married couple who head off to an idyllic island only to wake up with a bad hangover and discover an unexplainable video that shows one of them killing the other. With the film releasing this October 2nd, SCREAM caught up with the film’s director to talk about his fascination for immersive horror, the healing power of faith and religion and various projects in the pipeline which, as you all know, include Spiral: From the Book of Saw…

SCREAM: You’re chartering new territory here. After a bit of a hiatus from filmmaking to work on immersive theatre experiences, what piqued your interest in this script to get you back behind the camera?

Darren Lynn Bousman: Film will always be my primary bread and butter. At the end of the day, a lot of it has to do with bread and butter. Immersive theatre is my passion but that’s not paying the bills so I’m going to try and continue making a movie every year or so. I had been looking for a film that dealt with religion and faith – which is one of my favourite sub-genres in the horror world – and this script spoke those kinds of movies that I like that deal with faith as the undertone and which have that kind of cult mentality.

The film suggests that faith can, at times, be strong enough to heal terminal illness.

That’s right, and faith, and my constant struggle with faith, has been a big part of life. Since moving from the Midwest to Los Angeles, I find myself always in heated discussion with my parents, whether it be politics of religion, and going on the other coast made me realise that you are a product of your environment. When I grew up in Kansas, I grew up in a bubble and I was surrounded by a belief system and then in LA it’s very different. For example, for my parents in Kansas I look like a Left-wing lunatic but if they were out here then they’d feel the same as me. So when it came to the film – which takes two strangers in a strange land who become surrounded by this belief that they just cannot wrap their head around or comprehend – this same idea of how different cultures see things in a completely different light also applied.

You filmed in Thailand and dealt with themes of witchcraft and voodoo. Were you concerned about tackling religion and beliefs over there because, as you said, different cultures see things in very different lights?

Yes and no. We added quite a bit of fiction because we wanted to make sure that we were far enough away from the culture of what they actually believe there. We did take seedlings of ideas that we found and then exaggerated them and exploited those narrative things. First off, Thailand is such an amazing place. It was unlike anywhere I’d been before – from the culture, to the locale, to the filming process. But one of the things that was eye-opening to me is that there is a governmental body that basically sits with you on set and there are things that you can’t do at certain places or in terms of how you depict certain things. That was certainly nerve-wracking because you would plan these scenes but then they’d whisper in your ear that you are not allowed to do that. Everything had to be really planned out over there so when those challenges presented themselves, we would have to rapidly change course to try and fix that out. But we were definitely trying to be as respectful to the culture and to how we depicted it. And one thing I love about the movie is that no one that is part of this cult or movement views themselves as villainous because they really aren’t nefarious. It’s a belief that they have and they belief that it is all to save the crops, the elders and the children. And I think that that’s fascinating because I would do anything too if I believed that it would save the ones that I care about. If you think about it, all religion is based on sacrifice. If you go back to the beginning of Christianity, it’s about the sacrifice of Jesus and if you go back to the beginning of a lot of religions, their backbone is in sacrifice.

These beliefs go back so long, and the movie also shows how the locals have had to learn to adapt to new technology to help protect such deep-seated traditions and beliefs.

For sure! One of the things I love asking myself is, “How would technology work in horror movies now?” For many years I was attached to a Children of the Corn movie and one of the challenges that people had was how do you tell the Children in the Corn story in the advent of modern technology? I think that’s an awesome challenge because you have to find new ways to do it and the reality is, “Why can’t they call out?” or “Why wouldn’t they have video of what happened?” So I loved the fact that this culture in Death of Me has to deal with that as well. This group of people has to deal with technology that captures something people weren’t supposed to see, which I think is an interesting spin on tropes that we’ve seen before.

Another interesting spin was casting Maggie Q and Luke Hemsworth as characters we haven’t really seen them play before.

Absolutely. I love to show actors in a different light. This really isn’t an action-based movie and Maggie Q is definitely known for her action roles. And I wanted to play Luke Hemsworth as kind of nebbish and definitely not the strong man. I thought doing that was exciting and then they don’t understand the language so I loved it right off the bat how we just take everything away from them – from their passports, to their cell phones, to their luggage. Leaving them stranded on this island is like stripping them naked and making them more vulnerable.

The film plays a lot of tricks on the audience leaving us unsure of what we are seeing which is not that unlike what the lead characters in the film are experiencing.

One of my favourite things in movies is when they give the audience two different belief systems to believe in. They can believe in something supernatural or they can believe in something that has a real explanation. So in this movie we give you two different pathways to go down. Coupled with this, we wanted to make the violence in the movie very dreamlike. There isn’t a lot of violence in it but we wanted to make sure it was really extreme and to give it a fever dream feel to make the audience question whether what they are seeing is caused by a hallucinogen or if it is in fact real.

Everything is up in the air right now because of the Covid crisis but in terms of the future, we know that you have the Spiral: From the Book of Saw coming out in May 2021. How are your prospects looking right now? 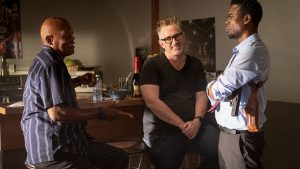 Spiral has had to be put on hold until next year, yes. But in the meantime, I’m back to doing immersive theatre right now. I’ve got a show opening in a couple of weeks called One Day Die which takes place in your home. It’s a magic immersive show that people can find online at www.onedaydie.com. What I love about this is that unlike a movie, where you’re passive, with immersive you are a part of it and manipulating the characters and you are in the centre of the story. I love that we get to allow the audience to be creative with us. This will be a Halloween event which runs from October 15th through November and I’m excited for people to experience it.

Surely all this work with immersive theatre must have lent itself to coming up with some amazing contraptions for Spiral?

Coming back to Saw was certainly an amazing experience after that. I can’t even explain the nostalgia of being able to do this movie. Ironically, talking about immersive theatre inspiring my films, I’ll tell you something crazy. The next movie I leave for in six weeks, Covid permitting, is called Tension. It’s written by Scott Milam and it’s based on the Tension experience and hopefully that will come out next year as well. Fingers crossed.

‘Death of Me’ releases in theatres, on Demand and Digital today, October 2nd