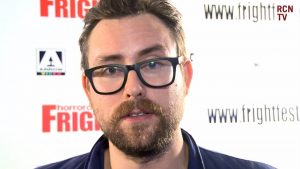 Being trapped in tight spaces and the fear of drowning are inherent human fears which have served as the backbone of some iconic genre cinema. Whether it’s being stuck in a cave with cannibalistic dwellers or stranded in the middle of an ocean populated by sharks, effective horror which employs such tactics is effective as it pits the characters in a realistic situation the audience can relate to. Therefore, these ideas have continued to inspire generations of filmmakers seeking to induce panic on viewers.

Ben Parker’s debut feature The Chamber is a claustrophobic thriller set on a submarine in peril in the Yellow Sea. While en route to a top-secret mission in North Korea, a military crew become stranded in their sinking vessel when things goes pear-shaped and cause tensions to boil over. With water pouring in and the crew at odds – not to mention the fact they’re marooned in a region where the government would show them no mercy if they were discovered – it basically doesn’t look good for them at all.

The Chamber is a wonderful hybrid, blending horror, political thriller and even some espionage to concoct an entertaining, well-crafted debut which boasts a healthy mix of genre heart and commercial aspirations. The Chamber is a crowd pleaser – and a superbly executed one at that – which will undoubtedly pave the way for Parker to move on to bigger and better things in future.

Recently, Scream had the chance to sit down with the hot newcomer to discuss the film, his influences, and future aspirations. Enjoy.

SCREAM: One of the things I loved about The Chamber was the political undertones. In recent years, the political anxieties between China and North Korea have obviously been big news stories. Just how much did those inform you going in?

Ben Parker: I think the geopolitical situation in North Korea informed me, but when we wrote the film over four years ago, none of this stuff had happened yet. But as we went through production and post-production, these things started happening in North Korea and China and I would get text messages and phone calls saying, “Hey, have you heard what just happened? It’s great – North Korea has launched missiles.’’ And I was like, “It’s not great at all. That’s a bad thing.’’ But I guess it meant that the subject matter was on point. I’m really interested in all that stuff though, but it’s hard to do in a way that’s entertaining on a small budget. So, we were going for an All the President’s Men idea where it’s in the background and we know it’s there, but we never quite work out what the problem is between North Korea and America.

SCREAM: Some of the directors I’ve interviewed in the past who have filmed in water have voiced their displeasure over their experience. How much of a challenge did it pose for you?

Ben: Yeah, I don’t know what’s wrong with me… But I did a short film with the same crew and the same producers – Jenna Handorf, Hugh Spearing and Paul Higgins. I’d written the short not expecting to get half of it done with stunts, CG, guns and when I gave the script to my brother, who’s also an actor and loved it, said it was great but we’d never get it made. Then when we did, we thought let’s challenge ourselves and try something underwater. I never expected that we’d be able to do the underwater stuff without going to somewhere like [underwater tank] Pinewood, but we built our own. Working with water is always going to be ten times more difficult than not, but I like that challenge – it’s nice. What you shouldn’t do it watch the making of [James Cameron’s] The Abyss beforehand – that’ll scare the daylights out of you.

SCREAM: Speaking of The Abyss, I felt as if there were a few nods to James Cameron throughout…

Ben: Yes it was something I was always conscious of and nodding towards. Then there was a lot of stuff I was unconscious of, like when you’d cut a scene and edit it and the editor would say, “You know, that’s a lot like Aliens.’’ [Laughs]. There’s also bits of [Michael Bay’s] The Rock. But I grew up in the ‘80s and ‘90s, so those influences were a big influence on my psyche.

SCREAM: The scenes with the military protocol were very well done and felt authentic. How much research went into that when you were writing the script? 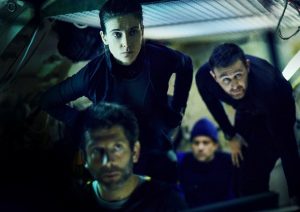 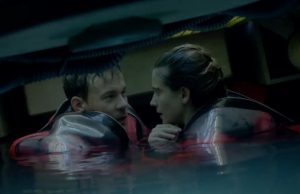 Ben: We did a lot. My family members were in the military. All the men in my family are military, and the women were nurses and carers, so I had a lot of great technical advisors. We tried to do all we could to be realistic and not piss anybody off. But you have the problem of losing people when you start giving them all of that technical jargon – 90% of the audience aren’t going to know what the hell that is. But there’s this trick that people like Christopher Nolan do so well where, if it’s too technical, they do it quick and get it out of the way. If there’s something that’s too complex for the audience to get then you repeat it a couple of minutes later in a different way, without turning to the camera and going, “Hey guys.’’ The key is to say what it means but not get bogged down by it.

SCREAM: Despite the mild resurgence recently with movies like The Shallows and other shark movies in recent years, aquatic horror and thrillers are few and far between. Did you set out with the intention to fill that void?

Ben: Subconsciously yes, but the seal of the story is from my imagination of things that my uncle did. It was also practical as my first movie was going to be single location with only a few of actors, so what type of scenarios could we come up with? It’s usually house horror. I had a treatment for a film that was based on an oil rig, but that’d have been super expensive to do. I like the idea of underwater as it’s claustrophobic and there’s no escape.

SCREAM: After seeing this, I’d add you to the ever-growing list of exciting British directors – like the Simon Rumley’s, Ben Wheatley’s and Christopher Smith’s – who are making exciting contributions to genre cinema. How do we feel about the current genre scene in this country?

Ben: I think it’s good. Regardless of personal preference of what I think about certain films, I use family members as a litmus test, so the fact that my dad knows the name Ben Wheatley is great as the only other director whose name he knows is Ridley Scott. It’s great that these directors are making a name for themselves and getting work. Hopefully they’ll continue getting money to make more stuff and won’t all go off to America. We need to make sure that there’s a spotlight on British filmmakers and film in general

SCREAM: Hollywood would allure most filmmakers though if they were given the chance. Would you like to make American films at some point?

Ben: When you see The Chamber there are American influences. I’d love to make a big budget movie. I also think that American filmmaking could use a bit more European sensibility, so it would be great to see more British directors make bigger films. As long as you remember where you came from and still do some home movies as well…

SCREAM: There’s also been a trend in recent years that’s saw indie directors make the jump to mega budget blockbusters after a movie or two…

Ben: It’s risky. I mean, it’s great in one way as you get to shoot straight up in budget, but it means that you need to work with a studio and the film needs to do well otherwise you might not get another opportunity. Rupert Wyatt did The Escapist and made the jump straight to Rise of the Planet of the Apes, Gareth Edwards just made Star Wars and guys like Rian Johnson – who did Brick – are doing well, so it’s great to see that Hollywood is turning to indie filmmakers and seeing that they’re not all just weirdos and giving them a chance. [Laughs]. 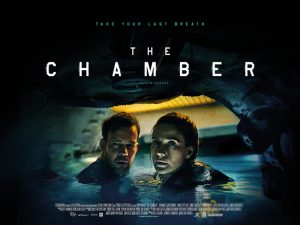 SCREAM: Do you have any projects coming up you can tell us about?

Ben: We were working on a house horror film before The Chamber and that’s still happening. I’ve also just finished writing a violent thriller set during the Second World War which I’d really like to do, but it needs a bigger budget. It’s kind of like The Treasure of the Sierra Madre, but instead of gold it’s a body.