Interrogation in Room #249 out now on Kindle 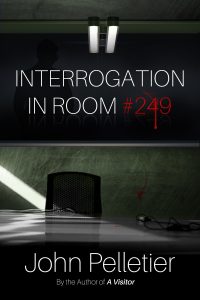 American horror writer John Pelletier has a new release, Interrogation in Room #249. Here’s the synopsis, an independent review, biography information on John and a link to grab your copy now.

ABOUT INTERROGATION IN ROOM #249:
The devil is in the details.

Detective Mike Distefano enters his favourite interrogation room one late night to begin questioning a suspect in a crime.

After sizing each other up, both men try to coax the other into talking about the circumstances that led each of them to the interrogation room.

The suspect prods at Distefano’s sense of accountability seemingly in a gambit to undermine the investigation until the detective is no longer sure of which party is about to be judged; the suspect or himself.

Review
“Interrogation in Room #249 was a unique and quirky tale of shifting realities. I love a good crime drama, but this story felt like it was pushing the boundaries between crime and horror (even better). The back and forward exchanges between the Detective and the suspect were witty and deep and found myself on tenterhooks trying to work out the catch. We had the typical arrogant detective and the suspect that tries to catch him on the back foot. Although a short story I found myself imagining scenarios of where this story could go.

Interrogation in Room #249 felt like a souvenir from a faraway place. It is short, sharp, and effective. I’ve always thought that my favourite part of crime fiction is when the bad guy is caught, and the questioning leads to explosive truths. The whys become apparent and the when’s make perfect sense. The title and the book cover are the hooks to reel you in, but the prose has you buckling in that seat beat.

So, a little bit about Interrogation in Room #249 you ask? The room is desolate and stark, and you can feel the despair and anguish of both characters etched on the walls. The detective tries to start the questioning with a source of intellect by making a reference to Alice in Wonderland, but it just comes across as hugely conceited. John Pelletier has excelled brilliantly at making both characters unlikeable. They both clearly have a past and both display undercurrents of darkness running through their veins. The detective clearly loathes criminals and distinctly believes that it is acceptable to rough up the suspects if it gets him the result that he wants. He has an even lesser opinion of the lawyers that represent them – he believes they will do anything to discredit him. He wears a wedding ring even though he is now divorced from his wife, it alludes that something major happened between them.

The interview does not go well. The detective just can’t get a handle on his suspect. He begins to get the better of him and he grows increasingly frustrated. The suspect quickly manages to turn the tables…why does he know so much about this detective? How does he know he’s divorced? Suddenly the penny drops, and you realise just how everything interconnects and it is shocking! Once again, I have enjoyed the horrors that John Pelletier can envisage.” – Yvonne Miller of Kendall Reviews

ABOUT JOHN PELLETIER:
John Pelletier is a horror writer and proud supporting member of the Horror Writers Association. He has self-published 4 novelettes on Amazon with many more stories left in him to tell!

He works as a librarian and lives in Ohio with his wife, and their three cats. Before he started writing he got a Bachelor’s Degree in English from The Ohio State University and a Masters in Library and Information Science from Kent State University.