An intense and striking trailer has arrived for Jeremy Saulnier’s Hold the Dark and it’s effortlessly heightened our excitement for his next feature.

Hold the Dark will follow a wolf expert who heads to the Alaskan town of Keelut, where it is believed wolves are behind the disappearance of three children. But, what’s really going on? The trailer suggests a mysterious occult tale, with talks of the devil and a type of sacrifice. It looks like it’s going to be super violent and grisly, which is to be expected from the director of Green Room and Blue Ruin. 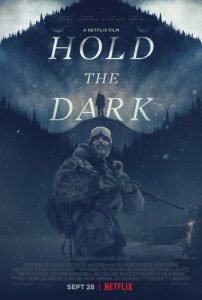 When speaking about the film and its challenges, Saulnier has said:
“It has my record number of intimate dialogue scenes and my highest body count. It has my first war scene, my first aerial sequence, my first time working extensively with animals. So in that regard it was a huge challenge.”

Hold the Dark is based on the novel written by William Giraldi and stars Jeffrey Wright, Alexsander Skarsgard and Beckham Crawford. The film will land on Netflix on 28th September, so there’ll be no need to leave your house if you want to watch this one. But, is that a good thing?