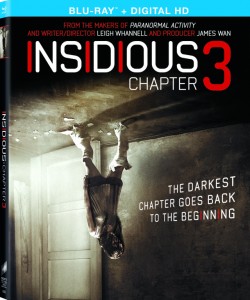 The arguably scariest – and best? – chapter of the Insidious franchise has been given a DVD and blu-ray release set for 6th October 2015.  It is due to be released even earlier on Digital HD, so if you’re keen to catch it as soon as possible you can download it from 22nd September – hurray!

There are plenty of extras to sink your teeth into, which you can see below:

Personally, I loved Insidious Chapter 3 and found it a huge improvement on the second instalment. I’m not one for bleeding film franchises dry, but I’d love to see a Chapter 4; my fingers are firmly crossed in the hope that we get some more Insidious action.