By the mid-1980s, the slasher movie was waning in popularity. Halloween, released in 1978, had spawned a slew of inferior imitators, and their formulaic structures often made these films too predictable to be genuinely frightening. But The Initiation, released in 1984, is both ambitious and innovative, and though it’s far from perfect, the film does attempt to push the slasher sub-genre into unexplored territory.

Most horror films that feature a female protagonist follow a conventional fairy-tale narrative structure, in which an infantilised, pubescent girl reaches maturation after a series of trials. The Initiation is no different, with the story focusing on Kelly (played by Daphne Zuniga). Kelly and her sorority sisters are being initiated into the Delta Rho Chi family, but at the same time, Kelly is beset with dreams of stabbing her mother’s lover as her father burns to death – a dream that may be a suppressed memory thanks to a convenient bout of amnesia in her past. The film culminates in a prank in which Kelly and her fellow pledges are locked in a shopping mall overnight, but what they don’t know is that a killer is locked inside with them, picking off the pledges one by one. 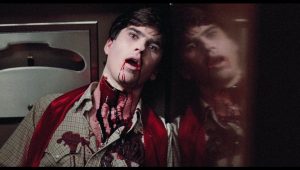 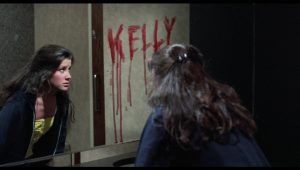 The film can really be split into two halves. The first deals with Kelly’s recurrent nightmares, allowing for some interesting conversations about dream analysis and the intangible nature of memory. The second deals with the familiar stalk-and-slash killings of the pledges inside the shopping mall. This structure – although uneven in terms of pacing – allows for a great deal of character development before any real killing takes place, with the first 45 minutes dealing almost exclusively with Kelly’s attempts to understand the source of her nightmares. But this is done at the behest of the other characters, who we never know enough to care about. In one scene, the sorority attends a come-dressed-as-a-supressed-desire party. Characters are dressed in whips and chains, as mimes, and – inexplicably in one case – as a giant erect penis, but nothing is ever said about what this tells us about them, meaning we don’t really care if they live or die. Besides Kelly, most of the characters are flat and one-dimensional.

In all teen slashers, sex and death are interlinked, and there is often a moral message that pre-marital sex – especially when initiated by a woman – will result in death. Though the film largely ignores making these kinds of judgements, there are a couple of problematic scenes which may be troubling to a modern audience. After being teased for the duration of the movie, Marcia finally confesses that she was raped as a child, that she never told anyone, and that she has never gotten over such a traumatic event. Ralph – who has previously stated that he thinks girls should be servile and passive in the bedroom – takes her aside and has sex with her, miraculously curing her, making her forget her problems. This is, quite frankly, the most distasteful part of the film, undermining some of the positive depictions of the other female characters. 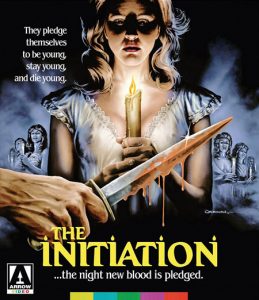 Director Larry Stewart does have some visual flair, filing the shots with typical Freudian images – mirrors are ubiquitous throughout – to reflect Kelly’s ever-fluctuating mindset. But where this film is won or lost is in the twist at the very end of the film, which will either be seen as shockingly innovative or entirely ridiculous depending on the viewer. The film certainly doesn’t pull any punches, but it also betrays some of the psychological questions posed during the first half of the movie.

But all in all, The Initiation is a fun addition to the slasher genre, with more than enough ambition to make up for some of the misjudged beats in the narrative. With echoes of Halloween, A Nightmare on Elm Street and Argento’s giallo offerings, there’s a lot here to enjoy, particularly for fans of other sorority slashers. The characters here all make a pledge to “stay young and die young,” but unfortunately for them, that’s exactly what they get.