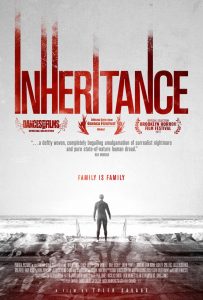 Ryan Bowman is informed that his biological father, who Ryan never knew and presumed was dead, has recently died in a surfing “accident.” Dad bequeathed his stunning California beach house, valued at 2.5 million dollars, to Ryan. While assessing the property and its contents, Ryan discovers that he’s inherited more than highly appraised real estate.

Inheritance is a film that revels in ambiguity. The question of whether Ryan mentally ill is open to interpretation. Director Tyler Savage adroitly toys with the notion of biological psychosis fuelling Ryan’s perception, but doesn’t rule out that the familial ghosts could be more than figurative. In a nod to Polanski’s masterpiece Repulsion, Savage illustrates the unhinging of the protagonist’s sanity through the image of wallpaper tearing away of its own volition. An eccentric neighbour feeds Ryan’s sense of mounting unease by remarking that “A lot of blood was spilled on this land,” referring to 19th Century abuses perpetrated by white men on Native American and Hispanic cultures. Ryan’s beautiful pregnant fiancée is of Hispanic descent, which adds another rather ominous dimension to the narrative.

Given his background, Ryan isn’t at all keen about the prospect of being a father. His reluctance gets reinforced by visions, possibly psychotic in nature or possibly psychic replays/ghostly reenactments. In a sly reference to dysfunctional families, Savage has a brief shot that shows the Steinbeck novel East of Eden; a book that takes place in the region where the film’s plot is set, and whose theme is the sins of the fathers. The camera also focuses in several scenes on what appears to be a native fertility artefact, which supports a potentially supernatural explanation for Ryan’s internal torment.

Actor Chase Joliet does a fine job conveying Ryan’s angst and Sara Montez gives the role of the fiancée depth and dimension. Drew Daniels’ cinematography is seductive yet menacing, what some would construe as a perfect metaphor for coastal California. Savage’s first outing as a director made an impression on the indie film circuit/festivals. He gets extra credit-praise for writing the story. Savage has generally succeeded in crafting a highly worthwhile genre piece although some scenes, such as when Ryan first hears about inheriting the house, display a certain roughness around the edges. 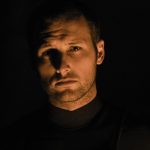 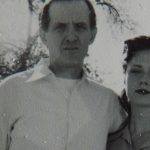 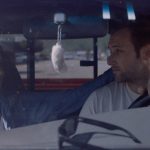 Inheritance is not infused with jump scares or cheap shocks. Horror fans who appreciate a nuanced yet hellish look into the baggage that comes with family can find the movie via iTunes, Amazon Instant Video, and Digital HD today, June 15th.