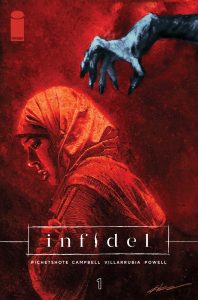 Haunted house stories have been done to death. Blood dripping from the walls, spooky children creeping in the corner of your eye, some sort of creepy nun or something; you can practically write the movie yourself. So how do you pump new life in a genre that’s as old as horror itself? By doing what Shirley Jackson had done her entire career: writing a story within a story and Infidel #1 tells a story that we know all too well. Image Comics newest addition to its horror library, Infidel combines our current political climate with a good-old fashioned ghost story creating a work that that’s both as timely as it is genuinely freaky. Much like Get Out, the comic easily transitions between the two opposites while leaving a slightly bitter taste in your mouth, but you know, the good kind of bitter. The kind of bitter that makes you a better person.

The comic focuses on a mixed race family living in the big city. Our lead, Aisha, is an American Muslim who begins to suffer from nightmares as soon as she moves into the apartment with her soon-to-be stepdaughter and mother-in-law. While she can’t quite pin down why she keeps smelling rotten meat and who this man is that keeps attacking her in her dreams, she has bigger problems to worry about, like her fiancée warning her about his own mother. It appears that her darling mother-in-law isn’t all that she appears to be and holds a deep hatred for anyone who is non-white, but Aisha refuses to see it. After all, she’s just a bit out-of-date right? Despite the cautions, she continues to hold out for the best but when her dreams start becoming a little too real, she might have to face some very unpleasant truths.

While Infidel is definitely a horror work, it’s how the creators approached that horror is what really makes it stand out. Infidel basically works on the premise: what if, instead of personal tragedy, a haunted building fed off xenophobia? No more betrayed lovers or mass murders (though there is a mass murder mentioned in the comic), but simply the shared hate of those who are different? The writer Pornsak Pichetshote cleverly cuts the horror with sprinkles of casual micro-aggressions, such as the television at the bodega playing a talking head piece about Muslim-based terrorism or Aisha’s mother-in-law ‘forgetting’ that Aisha doesn’t eat ham. While individually, the tidbits don’t seem all that bad, combined, it’s one more piece of misinformation that Aisha has to ignore and helps feed the building. It’s got a bit of a Frankenstein-vibe to it; who is the real monster, us or the monster we built?

That being said, the horror end does follow a tried-and-true process of bad dreams and creeping shadows. If you’ve ever seen a ghost movie, you know how it plays out; standard slow reveal, high tension, etc. Despite the two opposites of entertainment scale, Pichetshote knows not to let one story choke out the other and writes a great cause-and-effect work that actually need each other to tell the story. In other words, Infidel needs both the political and horror angle to work and together, deepens them both. 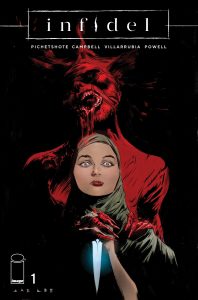 Joining Pichetshote on Infidel is artist Aaron Campbell, who has primarily worked on horror and crime titles for Dynamite Entertainment. Unfortunately his panel art comes off as stiff and heavily referenced, which in turn, drives the characters into “uncanny valley” territory, making the work kind of awkward to read. Luckily, his horror spreads are pretty stellar! He draws the monsters with a soft, ethereal touch whose presence effects the visual integrity of the objects around them and helps create a truly otherworldly existence. The ghosts really feel like they’ll slither into your bed and hold hands with you. It’s good compromise for less-than-amazing filler art.