IFC Picks Up Vicious Thriller What Keeps You Alive

Having premiered at this year’s SXSW festival, brutal thriller What Keeps You Alive has been acquired by those good folk at IFC Midnight. 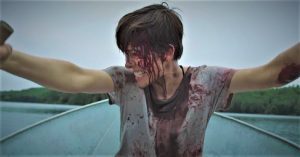 The film was written and directed by Colin Minihan, and pits a couple against each other during their one-year anniversary. The warring lovers are played by Hannah Emily Anderson and Brittany Allen, both of whom starred in last year’s Jigsaw. Allen also starred in Minihan’s 2017 festival hit It Stains the Sands Red. Co-starring are Martha MacIsaac (2009’s The Last House on the Left, Superbad) and Joey Klein (Painless).