The Iconic Ghostface Mask to Return in Scream Season 3

If you were disappointed that the iconic Ghostface mask from the Scream film franchise did not feature in the TV series, then you’ll be glad to know that it has been confirmed that it will appear in Season 3. Better late than never, eh?

We thought season 1 and 2 were great regardless, but the inclusion of the original Ghostface mask does fill us with glee. Check out a behind-the-scenes image here, which shows the iconic mask back in action on the set of the new season. 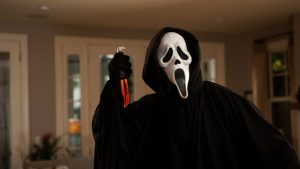 Scream Season 3 is set to mix things up, by replacing the entire cast and focusing on an entirely different set of characters and location to the previous seasons. Everything was pretty wrapped up by the end of season 2 – and its Halloween 2016 special – so we’re glad to see the show is stepping in a different direction.