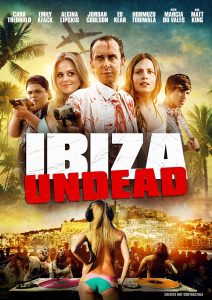 With the whole world learning to live with a zombie apocalypse, a few islands are immune from the infection. Guess what? Ibiza is one of them! A group of young people head to the party island for sun, sea and sex, but discover a club owner who has a few of his own private walking dead and their boozy holiday plans are flushed down the toilet.

I generally hate most films like this and for very good reasons. Films that rely on jokes about banging sluts, drinking spunk-infused cocktails and getting boners from dead girls are the bottom of the barrel for me, and I hope for the majority of the mature film-watching audience. Ibiza Undead relies on this type of comedy that was perhaps once impressive during the era of The Inbetweeners. However, there was an ounce of realism and a comment on the struggles of adolescence below The Inbetweeners’ crudity and, most importantly, it was actually funny. Ibiza Undead is not funny and it is not scary. Therefore, it is a failure of a horror-comedy. Shaun of the Dead meets The Inbetweeners? It wishes!

I can only imagine that writer-director Andy Edwards was living a personal fantasy as he wrote the script for this shambles. Ibiza Undead must be his dream; a dream where everyone in Ibiza is half-naked, getting drunk from the morning to the night and having the BEST time as they talk about getting wasted, getting laid and doing it all over again tomorrow. There are predictable montages of partying as bikini-clad chicks down bottles of champagne on the beach or on boats and grind on the closest man they can find, all in predictable slow-motion to music with lyrics like “just do me”. It’s as surprising as the film’s eventual nightmarish descent into hell when Karl (Matt King) the club owner’s zombies get loose.

From one predictability to the next, it’s a struggle not to switch off Ibiza Undead, because we’ve seen all of this before. The characters are carbon cut-outs of every teenage group from rom-zom-coms; there’s Alex who’s trying to get over his ex-girlfriend (who’s also in Ibiza, so you can see where all that’s going to go), the geeky, skinny guy called Az who’s the joke of the group (he puts sun cream on inside, because “it’s better to be safe than sorry!” and the over-weight Big Jim who spends 99% of the film boasting about how many “bitches” he’s slept with, but spoiler alert: he’s a virgin. The film tries to make up for its lack of creativity by disguising its familiarity in a shroud of bright-coloured lighting. The scenes are doused in reds, greens and yellows to give the film an ’80s vibe that it doesn’t deserve and it looks beautiful. Nonetheless, this type of lighting is nothing new and only works to heighten the film’s lack of originality. If there’s nothing but a hollow, emotionless and depth-less shell below your film’s pretty surface, then you’re doing it wrong.

All in all, Ibiza Undead is a disappointment. What could have been a self-aware, fun and witty romantic zomedy is merely a predictable mess that only serves to secure my general distaste of horror-comedies that only use sex and alcohol to generate laughs. With a little more intelligence and a set of characters that weren’t so infuriating, Ibiza Undead could have been an enjoyable, entertaining and memorable flick. But, it’s not. Steer away from this one-trick pony and watch Cooties, Dead Snow or the British zomedy classic Shaun of the Dead if you like your reanimated corpses to have a generous helping of comedy on the side. 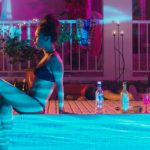 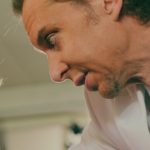 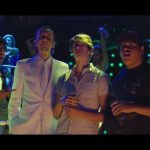 Special Features:
The special features are brief, but they’re pretty decent and explore behind-the-scenes of the film. If you can bear to do that, that is. All the lead actors talk about their respective characters and discuss the atmosphere on-set which seemed expectedly fun and enjoyable. You can also see how some of the cunning stunts were achieved and the work that went in to choreographing the zombies. Honestly, the hard-work behind-the-scenes is impressive and it’s a shame that the final product didn’t manage to hit the mark. There is also a look at the film’s premier at last year’s Horror Channel FrightFest with a couple of interviews on the red carpet. Finally, there is the full short film House Part of the Dead 6, which shows a lot of the smaller parts that later accumulate into Ibiza Undead.