I SPIT ON YOUR GRAVE AT 42: MEIR ZARCHI AND JAN O’CONNELL SPEAK OUT 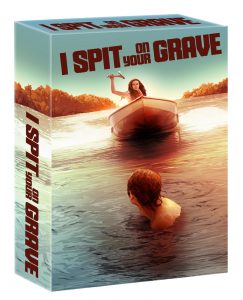 November marked the 42nd anniversary of I Spit on Your Grave (aka Day of the Woman), one of the most infamous rape-revenge movies ever made. First released in 1978, the film rose to notoriety in the US when famed critic Roger Ebert labelled it a “vile bag of garbage… sick, reprehensible and contemptible.” A few years later, it was prosecuted and banned in the UK, helping to set the “video nasties” list and much ensuing moral panic in motion. Decades later, the controversy waged on. Even as recently as 2010, the Irish Film Classification Office prohibited people from buying it locally when it was re-released on DVD.

This infamy is certainly warranted. Telling the story of Jennifer Hills (Camille Keaton), an aspiring writer who is brutally gang-raped before taking revenge on her attackers, I Spit on Your Grave is unflinching in its portrayals of horrific violence, including lengthy scenes depicting Jennifer being raped. To some, it’s misogynistic exploitation. To others, it’s a feminist masterpiece.

Looking back, writer-director Meir Zarchi wouldn’t do anything differently. The film is upsetting—but then, it’s supposed to be. And as the saying goes, there’s no such thing as bad publicity.

“I did it for myself first, the way I thought the movie should look without thinking about critics or [the] MPAA [Motion Picture Association of America],” Zarchi told us over email recently. “Fortunately the public accepted it. Even the folks who didn’t like it contributed to its life span. It’s forging ahead and will live well beyond my years… I think people will debate this film for another 42 years.”

“The title will always invoke discussions [of] ‘Is it a feminist or exploitation film,’” says Jan O’Connell, who produced the long-awaited sequel I Spit on Your Grave: Deja Vu, released in 2019. “People interpret, or shall I say define, those two words differently. I think as long as it opens up dialogue, it’s a foot forward in the right direction. 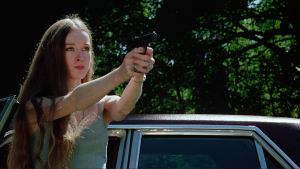 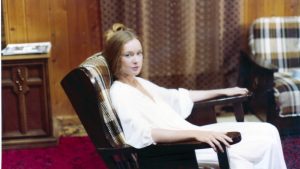 While Zarchi seems at peace with the I Spit on Your Grave’s legacy of controversy, one aspect of its original release still bothers him: the decision made by the Jerry Gross Organization, the film’s distributor, to drop its original title, Day of the Woman, in favour of the more provocative Spit.

“My heart sank—[I] had an empty pit in my stomach and even became pale,” Zarchi recalls of the moment he learned of the decision. “I asked him, ‘What kind of title is that—I Spit on Your Grave?!’ He said since the film was released already under ‘Day of The Woman’ it may have a second chance in the theatres. Once I retained the rights again for the film in 2002, any contract I signed with a distributor had to have both titles, ‘I Spit on Your Grave aka Day of the Women.’”

While Zarchi didn’t like the new name, I Spit on Your Grave did find indeed find new life. The director first became aware that his film was gaining cult status when Ebert and fellow critic Gene Siskel vehemently discouraged people from seeing it, going so far as to call it one of the worst films they’d ever seen.

“They helped make the film famous, and people ran out to see the film,” Zarchi says. “Once it hit the video market, it climbed to the top 100 sellers on billboards for weeks. I was in shock. I didn’t know the distributor sold the video rights until I was walking by a store and I saw stacks of I Spit on Your Grave VHS cassettes for sale.”

O’Connell was one of the many people who sought out the VHS after hearing Siskel and Ebert’s scathing review. Majoring in film at Chicago’s Columbia College at the time, she would rent two or three movies a night in between catching new releases—and as a fan of horror, I Spit on Your Grave quickly shot to the top of her list.

“The nice Catholic girl in me had to see what the ruckus was all about,” she recalls. “Visually, I liked the way it was shot. It was raw—real… Classic 70’s long master shots that kept the viewer at a distance—not in a voyeur way but almost questioning—is this really happening? The colours, mood, and tone of the film all captivated me as a viewer and a professional artist. I immediately connected with Jennifer Hills and, as a filmmaker, respected Camille Keaton as an actor. I thought to myself, ‘She was so brave to take on this role.’ Not many actresses could have pulled it off.”

Keaton would later return for I Spit on Your Grave: Deja Vu, with Zarchi once again in the director’s chair. Set 40 years after the events of the first movie, the sequel sees the families of Jennifer’s victims plotting their revenge against her and her daughter Christy (Jamie Bernadette), with predictably nasty results.

Zarchi, who married Keaton the year after Spit was released (the pair divorced in 1982), says Keaton had been looking to work with him again. “She said numerous times, ‘Meir, when are you going to make a sequel.’ We both have mutual respect for one another.”

As it turns out, Zarchi was planning a sequel for some time but put it on hold while the inevitable remake was in the works. Directed by Steven R. Monroe and released in 2010, that film went on to spawn two sequels of its own.

“Once the last one was released in 2015, we immediately went into production,” Zarchi says. “I chose to finance it myself so I could keep full creative control.”

“I respect that he made what he wanted to make,” O’Connell says of that decision. “Not many filmmakers can do that these days. Studio films, the filmmakers do not have final cut, and you’re testing your film with audiences—cutting your film for audiences… As a creator, it wears on your soul after a while.”

As a fan of the original film, O’Connell jumped at the chance to produce Deja Vu. The opportunity first began to crystallise when she met Terry Zarchi, Meir’s son, who directed the feature-length documentary Growing Up with I Spit on Your Grave, released in 2019.

“We hit it off right away,” O’Connell says. “We talked extensively about how Meir wanted to shoot the film. Once I met Meir, that was it. I read the script and I knew there was something special happening here… we all did. It’s very complex with so many layers and not your typical revenge film. Meir and I had long discussions about the script. As a producer, part of your job is to ask why… What is the motivation in these scenes? I approach making films professionally and personally visually first, then I dive into the complexities of the words in the script. That also helps define the budget as well.”

With I Spit on Your Grave Being as infamous as it is, word of a sequel was always going to raise some eyebrows. O’Connell wasn’t concerned. As a filmmaker herself, she lives by the words of Henry Miller: “Paint what you like and die happy.” Plus, as the original film proved, criticism isn’t necessarily a bad thing.

“As long as they’re talking about the film… be it positive or negative… at least there’s conversation,” she says. “In today’s world via the internet everyone’s a critic—that can be good and it can be bad, but at least they’re talking about the film. Every filmmaker strives for that kind of acknowledgement in this fast-moving social media world… Meir Zarchi is lucky that 42 years later the conversation is still continuing about his film.”

Of course, the world had changed a lot in the four decades between I Spit on Your Grave and its sequel. In the wake of the #MeToo movement, many people’s eyes were opened to the prevalence of sexual assault and harassment. Zarchi says the movement didn’t have an impact on his approach to Deja Vu, but he was interested to see how the conversation around Spit would evolve.

“If anything, I thought it would open up discussion again about the film,” he says. “Which it did and still does today.”

O’Connell is proud that Deja Vu managed to be a rarity in Hollywood: a horror/revenge film with three strong female leads (Keaton, Bernadette, and Maria Olsen). She described the sequel as being “in a box of its own”—a feat Zarchi also achieved back in 1978 with Spit, a film which stubbornly refused to fit into the box critics wanted it to.

“It’s not what you expect,” O’Connell says of Deja Vu. “It’s dark, broody, and still delivers a devastating punch… [Christy’s] motivation for revenge is much more complex than the first and the characters along with the town they live in are somewhat surreal on purpose… Meir Zarchi is asking the audience—is this real or are these people just caricatures of themselves? I guess only the viewer will be able to answer that question.”

For fans who haven’t seen Deja Vu yet or want to revisit the original Spit, now is the perfect time to do it with the release of the new 3-disc Collector’s Edition Blu-ray box set from Ronin Flix. The box set compiles a stunning new 4K scan and restoration of Zarchi’s 35mm original camera negative of I Spit in Your Grave (including a newly restored original mono soundtrack), along with I Spit on Your Grave: Deja Vu, Growing Up with I Spit on Your Grave, and a host of special features, deleted scenes, and commentary tracks. A 44-page booklet of historical photos and liner notes accompanies the Blu-rays, all of which are tucked within a deluxe custom slipcase featuring gorgeous new artwork by Adam Stothard depicting Jennifer’s final act of revenge. Two posters and VHS box-style magnets round out the box set. It’s the ultimate treasure trove of I Spit on Your Grave collectables and trivia—and an ideal holiday gift for horror fans.

O’Connell recommends checking out the brand new commentary track on Deja Vu, featuring Joe Bob Briggs of MonsterVision and Last Drive-In fame. “He points out amazing artefacts from the film,” she teases, noting that it will make you look at the sequel differently.

As for whether Deja Vu will be the final film in the franchise?

“I would leave it up to the audience to decide,” Zarchi says.