I KNOW WHAT YOU DID TRAILER REVEALED 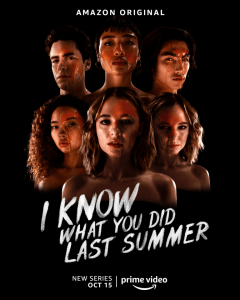 Amazon’s I Know What You Did Last Summer series is ready to take a fresh stab at the teen horror classic, and the trailer is here to prove that secrets—like horror franchises—never stay buried for long.

As with the 1997 movie of the same name, the series will find a group of teenagers bound by a dark secret: on their graduation night one year ago, they were involved in a fatal car accident that they covered up. But someone knows their secret and is going to make them pay… in blood.

Amazon will release the first four episodes of I Know What You Did Last Summer on October 15th, with new episodes dropping every Friday. Check out the full trailer below.