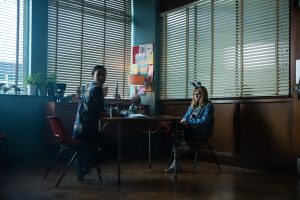 A young girl escapes into her own fantasy land, where she believes she is protecting her town from murderous giants, in order to escape from the harsh realities of her life.

Following in the footsteps of touching young adult features like 2016’s A Monster Calls, I Kill Giants explores the difficulties of growing up through a blend of horror, adventure and coming-of-age drama. It will tug at your heart strings with ease and keep you guessing throughout – are giants really coming to put an end to humanity? – but, I Kill Giants’ over-arching message is one we’ve been taught before.

At the heart of the story is the troubled Barbara, a young girl who struggles with bullies at school and comes home to a life that is less than perfect. Along with her older brother, she is raised by their older sister; but the whereabouts of her parents is kept vague. They’re a broken family, but we don’t know why. Of course, all is revealed by the end and the mysteries of her family life explode in an emotional and heart-wrenching climax.

Perhaps its the similarities to A Monster Calls – which was actually written after I Kill Giants, but nabbed an earlier film adaptation – that prevents me from completely being on-board with this story, but I Kill Giants certainly lacks the emotional assault of J. A. Bayona’s. This treads a very similar path, working well as a twin sister with its preoccupation with mental illness – rather than physical – and a literal clash between fantasy and reality.

Barbara may be the victim of bullies, but she’s not weak. She hits her psychologist, runs away from home and rudely pushes away anyone that tries to get close to her. It’s a realistic depiction of a girl going through what she is and it’s refreshing to see a portrayal that is honest in its negativity. It is the honesty in her characterisation that helps to propel the film’s more emotional side, as we feel for her and the way she fails to healthily deal with her feelings.

Madison Wolfe stuns in the leading role and in Barbara she is given a role to truly get her teeth into. Her co-stars Zoe Saldana as Mrs Molle and Imogen Poots as the older sister Karen are, too, excellent and help boost I Kill Giants’ credibility, boosting its affecting edges through poignant performances. 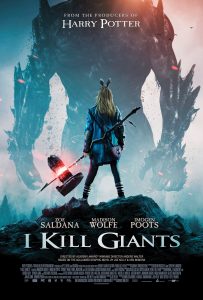 Barbara’s angsty outbursts are coupled with beautifully animated images of a world under attack by giants, working well as a metaphor for the destruction she thinks is happening to her own life. Although we’re never sure, until the finale, whether the giants are real, it’s clear that they are still a manifestation of her anger and her desire to destroy the pain that she is feeling. Again, it’s a nice little association, but an obvious and familiar one.

I Kill Giants is a lovely story and one that is coated in real-life horrors, the one’s that haunt your waking dreams and the one’s you fear. However, if you delve beneath, you’ll also find a sweet centre that follows one girl’s attempts to cope with her own personal nightmare. It’s as subtle as a brick, but I Kill Giants is equally as exciting as it is touching.