Greg McLean’s highly anticipated The Belko Experiment is due to hit cinemas in March, and we can now get a real taste of what’s in store with this first red band trailer.

It’s corporate Battle Royale as a company-wide experiment sees the employees of Belko Industries locked into their high-rise office and instructed by a voice over the intercom that they are to kill or be killed. 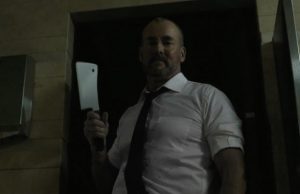 McLean – the man behind Wolf Creek, Rogue and The Darkness – directs from a script by James Gunn, who has previous with Rooker, having cast him in his films Slither and Guardians of the Galaxy.

The film premiered in September at the Toronto International Film Festival, whose International Programmer Colin Geddes described it as “ruthlessly violent.”