Hunting The Monster in Stills from The Strangers Director’s Latest 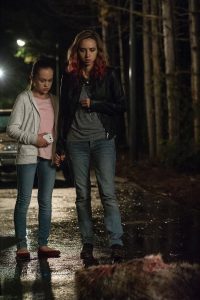 As we await that long-mooted The Strangers sequel, the director of the 2008 home invasion favourite, Bryan Bertino, has been busying himself with The Monster, for which these two new (very similar) shots have emerged.

Originally titled There Are Monsters, the film stars Zoe Kazan (In Your Eyes, Meek’s Cutoff) and Ella Ballentine (The Captive) as a mother and daughter trapped and hunted by a savage monster. The Strangers’ Scott Speedman and Battlestar Galactica’s Aaron Douglas also star.

The Monster was picked up for distribution earlier this year by A24, who are steadily building an impressive catalogue of idiosyncratic genre films, having also put out The Witch, Green Room and Swiss Army Man this year.
Read on for the official word on the film.

From the creator of The Strangers comes a world of the lost; freezing, spitting needles of rain, thunderbolt lightning, hypothermic cold and disorientating utter darkness.

Mother and daughter trapped and tormented in a black forest by a screeching creature – it is unlike anything we have heard before. Not human. Not animal. Like a thousand horses, like a mother’s clamour, a baby’s wail, a father’s howl. 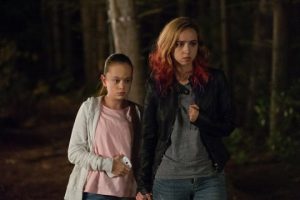 Their relationship at breaking point, 10-year-old Lizzy is all out of faith in her mother Kathy but tries to stay brave and fearless. Kathy, on the edge, barely keeping it together, knows that only a mother’s protective love, her most primal instinct, can save her daughter from what’s lurking in the darkness…

The Monster lands on DirecTV on October 8, followed by a US theatrical release in November.