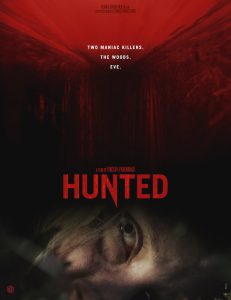 The early scenes of Hunted detail an experience that’s all too familiar to many women. Fed up with her overbearing boss and ever-ringing phone, construction supervisor Eve (Lucie Debay) impulsively decides to go out for a drink, where she is almost immediately accosted by the sort of man who takes disinterest as an invitation and “no” as a personal affront. A white night (Arieh Worthalter) rides to her rescue—but his easy smile masks the jaws of a predator.

From there, Hunted quickly descends into the sort of territory we all quietly pray we’ll never experience: Eve’s saviour becomes her captor, toying with her before forcing her into the trunk of his car with the help of his naive yet reprehensible accomplice (Ciaran O’Brien). Eve manages to break free and runs into the forest in the dead of night, with both men hot on her heels.

It’s not a new premise for a horror-thriller, but director Vincent Paronnaud throws in enough new and unexpected elements, locations, and characters to keep the film fresh. This is especially true in the climax when the leads emerge suddenly from the wilderness and run bloodied and screaming into civilization. It’s a welcome reprieve after an hour of looking at trees, while also furthering Paronnaud’s overarching message: that beneath all of humanity’s trappings of modernity lies something primitive and feral. 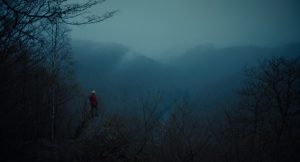 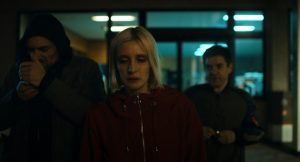 The transformation Eve’s character goes through—from deer-in-headlights inertia when she first realizes how dangerous her pursuer really is to club-wielding wild woman—is what sells this theme. Debay’s uninhibited and highly physical performance is thrilling to watch, and Paronnaud cleverly finds a way to give her character a makeover that leaves her resembling a Celtic warrior. Worthalter is equally compelling, snapping between charming and unhinged in the blink of an eye, but Paronnaud and Léa Pernollet’s script doesn’t give his character enough depth to make him anything more than a one-dimensional representation of toxic masculinity.

This wouldn’t have been as much of a problem if the fairytale elements established in the film’s opening had been more consistently applied. After all, in fairytales, we accept that characters are archetypes, there to tell us a lesson, nothing more. But other than a few daubs of the fantastical throughout—Eve’s red hooded jacket, the deer she curls up beside to stay warm, the crow which helps her out of a sticky situation—these elements feel massively underused, at least until the finale rolls around. The film is at its most interesting when it strays from the beaten path, but the weirdness never quite reaches the same level of frenzy that the performances achieve.

Tense, ferocious, and frequently nasty, with some shocking moments of gore, Hunted is a movie that could have benefited from leaning into its stranger urges more often. But even when it isn’t weird enough for its own good, it still manages to be a pretty damn good watch.