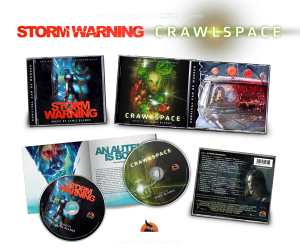 While horror fans may be familiar with director Jamie Blanks for his post-Scream slashers Urban Legend (1998) and Valentine (2001), a lesser-known fact is that the hugely talented Blanks is also an award-winning composer. In 2007 this Australian auteur composed the soundtrack for his brutal and subversive genre piece, Storm Warning, which would go on to win Best Musical Score at Screamfest, an achievement that Blanks would repeat in 2012 with his score for Crawlspace (2012).

Now, for the first time, both award winning soundtracks are available exclusively from Howlin’ Wolf Records as a 2-CD set that boasts a 32-page colour booklet, with never seen before behind the scenes photos, and liner notes from the likes of Adrian Roe, Mike Thorn and Jamie Blanks himself.

Information from Howlin’ Wolf Records reads:
“Howlin’ Wolf Records proudly presents a 2-CD set with music composed and performed by accomplished Director and Composer Jamie Blanks – STORM WARNING (2007) and CRAWLSPACE (2012) – Both scores won “Best Musical Score” at Screamfest the only two years Blanks entered scores for competition at the festival. Renowned and award-winning for both directing and composing, Jamie Blanks is best known as the director of both URBAN LEGEND (1998) and VALENTINE (2001), and the director, composer, and editor of both STORM WARNING (2007) and LONG WEEKEND (2008). STORM WARNING and LONG WEEKEND were both written by legendary screenwriter Everett DeRoche, who Blanks kept as a treasured friend up until DeRoche’s death. CRAWLSPACE (2012) is the directorial debut of Justin Dix, Blanks’ practical effects and make-up wizard for both STORM WARNING and LONG WEEKEND. Like Blanks with his two wins for “Best Musical Score,” Dix won “Best Makeup and Effects” at Screamfest in 2007 and 2012.

Blanks’ reputation in both Hollywood and Aussie Cinema is remarkable. Mike Thorn (Author of “Shelter for the Damned” and “Darkest Hours”) writes about Blanks, “Jamie Blanks is an auteur, plain and simple, and this fact has been clear from the very beginning of his career.” In addition to accomplished skills as a broad-ranged filmmaker, in the mold of John Carpenter, Jamie Blanks is also known as one of the most good-natured men in the entertainment industry. A key cast member on his first feature film (URBAN LEGEND, 1998) commented in an interview that were it not for how “nice” he was, she would have thought he was a seasoned director of many films. To Blanks’ credit, the mix of artistic creativity, technical excellence, topped off with kindness and generosity, has blossomed more as his career advanced to the stature of one of the great filmmakers of his generation, with the talent to direct, compose, and edit visually stunning films with rich narratives.

Concerning STORM WARNING, Adrian Roe (Author of “First Scream to the Last” and “Final Scream”) writes: “Blanks’ expertly crafted use of music, visuals, and striking imagery ramp up the atmosphere and tension to a visceral level that becomes almost unbearable, and only has one way to go—breaking point.” Blanks is accomplished stylistically from synth-based to orchestral. The score for STORM WARNING is that of a brewing storm – when it reaches its peak fury – all “Hell Breaks Loose.”

With a foreword by author Mike Thorn, detailed notes on both scores by Jamie Blanks, and an epilogue by author Adrian Roe, STORM WARNING/CRAWLSPACE features Howlin’ Wolf Records’ most extensive packaging to date with a 32-page, full-colour booklet, stunning photography by both Terry Hope and Hugh Fleming, and gorgeous original artwork by Hugh Fleming, all gloriously crafted and designed by long time Howlin’ Wolf Records Art Director, Luis Miguel Rojas.”