HOUSE OF THE WITCHDOCTOR: Film Review

Synopsis:
A group of friends are terrorised by Cliff Rifton (Allan Kayser) and Buzz Schenk (David Willis) who are intent on wreaking havoc on their weekend getaway. 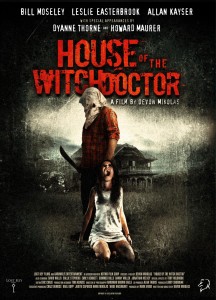 House of the Witchdoctor starts poorly and doesn’t really get any better. It sets itself up as immediately insulting and derivative as we are introduced to a group young folk venturing to spend the weekend at an empty estate. Rather than opting for a tongue-in-cheek and self-referential manner like it should have, The House of the Witchdoctor adopts a shockingly serious tone. There is no fun and no self-awareness present when we are introduced to Regina (Emily Bennett) and Tom who are only interested in making out with each other and their polar opposites; Patty (Summer Bills) and Thad (Jonathan Helvey) who do not believe in pre-marital sex. This is the film’s prime opportunity to let its audience know what it is doing and comment on the stereotypical representation of these people, but it’s entirely missed. Instead, the film chooses to play it straight, which is ludicrous. These characters are ridiculous exaggerations that borderline on being hyper-real, so to imply they are realistic is just insulting and a completely missed opportunity.

Cliff and Buzz are a couple of terrible human beings, if you can call them that. Cliff has just been released from prison and moves back home to live with his god-fearing mother. I suppose there is a comment about religion here and I imagine that the film is trying to suggest that even the holiest of women can birth monsters. Perhaps religion itself is evil? Either that, or religion is there to be laughed at in the form of Patty and Thad. Whatever its intention, the presentation of religion is offensive and lacks any tact or initial intelligence that would elevate its ideas above pure stupidity. Quite frankly, it’s boring. The lack of creativity and identity in this film is one of its biggest mistakes, because almost every aspect of it has just been stolen from other, better, films. From the Texas Chainsaw Massacre-esque kookiness of the villains to the basic concept that has been seen in Black Christmas, Friday the 13th and every other slasher film, House of The Witchdoctor is uninspiring and lacks the excitement that is needed in slasher and home invasion features.

Things go downhill further as the film trundles on its route through mediocrity as it misses every beat it so desires to hit. There’s a clear desire for the film to be reminiscent of early exploitation flicks and video nasties as it fills its runtime with pointless female nudity and excessive violence, but it doesn’t manage to embrace what makes those films so watchable. Despite their gruesome content, films like I Spit on Your Grave (the original, of course) bask in their refusal to be like typical mainstream Hollywood flicks and express an interest in pushing cinema to its limit. House of the Witchdoctor is difficult to watch for an entirely different reason, because there is no meaning behind its brash violence and excessive nudity. The camera is used to trace the female characters’ bodies in a way that is entirely demeaning and pointless, the long takes of aggressive violence are redundant and lack any shock value – because really, there’s nothing new or praiseworthy in showing a woman getting raped or someone being stabbed, especially when they walk around as if nothing ever happened.  This film is a perfect example of a film-maker that has very little idea of what it takes to capture the pain, desperation and helplessness of characters that are in dire distress and, in turn, draw out feelings of empathy and compassion in an audience.

The light at the end of the tunnel is that Bill Moseley and Leslie Easterbrook make an appearance as Leslie’s (Callie Stephens) parents. Her parents are, quite literally, The Devil’s Rejects. Unfortunately, this works against the film as much as it does in its favour, because it is now quite obvious that this house is going to be home to some strangeness. The film’s title also gives this away, sadly. Nonetheless, the final 20 minutes are the best moments of the film, but that really isn’t saying much. It blends the ideas of The House of the Devil with Kill List, which again, adds to the film’s inability to shock, because there’s nothing new present in this climactic finish. Like most of the film, the finale is far too long and loses its surprise the longer it is played out and is, quite clearly, a desperate attempt to showcase its two biggest stars. Moseley and Easterbrook spend most of their screen time looking aghast at what they’re doing, as if they’re gritting their teeth until they can escape the film’s horror and I can’t blame them. It’s probably best if they forget this film ever existed, like I am going to try and do. 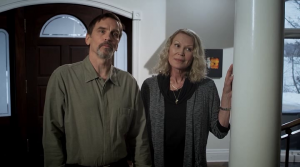 If it were more clearly a joke, there would have been some fun to be had with House of the Witchdoctor, but unfortunately, it culminates into an offensive, sexist and unforgivingly predictable mess that has no redeeming factors. Not even the Devil’s Rejects can elevate this film from being anything more than a disaster.