THE HOUSE IN WALES: Book Review

It’s World War II and Danny Kelly is one of the many children and teens evacuated from big cities to escape the German bombs. As he leaves Liverpool and arrives in North Wales, he finds himself in the care of Reverend Gwynfor Davies and the stern house keeper, Miss Trimble.  They live in a dilapidated house on the grounds of an abandoned church. It’s clear from the start that his guardians are not at all what they appear to be.

The setting is really great. I haven’t read too many historical horror novels, but the period was accurately evoked. Having lived in Liverpool for a number of years before moving to Louisiana, and having spent a good deal of time in the Colwyn Bay area of North Wales, this was a rare and pleasant occasion when all the places described in a book were familiar to me.

Reverend Gwynfor is a conman pretending to be a priest.  For many years he’s run a side business in black masses and orgies for the rich seeking danger and the taboo. The reverend has lost much of his fire following the recent cover up of an unexpected suicide. The death brought into the couple’s possession a black magic ritual book and the mysterious arrival of an imposing black Irish Wolfhound, Astaroth. The dark arts were always just a money making scheme for Gwynfor but that is not the case for his housekeeper Miss Trimble. She is by far the most interesting character, committed to her cause completely, strict and cruel, but at the same time oozing sexuality. She manipulates men at will with her sensuality. 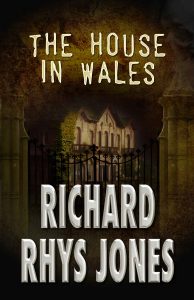 It is certainly unusual to have a dog as a major character, but this is far from any normal dog. He is a constant threat and guardian of Miss Trimble. Danny suffers at the hands of Miss Trimble and Astaroth.  He is mentally tortured and haunted by mysterious goings on in the house at night. The closet in his room is a source of unexplained occurrences, apparitions and fear. The intrigue in the house builds as Miss Trimble and Astaroth work towards their devilish goal of performing a black mass ritual as laid out in the book with Danny as the sacrifice. Danny’s only hope is a few teenagers from the village and a fellow evacuee, Sandy.

The majority of the scares come from the impending tension of the situation rather than gore and murder. The atmosphere is so well created and there is subtlety to the horror for the most part. I can tell you that there is one incredibly shocking scene that I’ve thankfully never had to read about before. The story features an exciting and satisfying climax and conclusion on the night of the sacrifice. All in all, this was a fascinating and enjoyable read with an intriguing plot. A definite recommendation from me.