Tim Curran’s ascent to the top of the horror genre continues with his latest offering, House of Skin. Eddy Zero never knew his father, Dr. William Zero, except for what he read in newspaper clippings. Dr. Zero, aka Dr. Blood-and-Bones, disappeared after becoming a legendary serial killer. Eddy believes that the best way to find him is to emulate him – become him. As Eddy seeks his father, there is also someone who seeks Eddy. Pyschiatrist Lisa Lochmere knows the danger that Eddy poses, and so she tracks him. She is eager to make her name in her field by writing a book about this extraordinary case. At least that is what she tries to convince herself is her motive.

The book flashes back to the rise of William Zero and his associates, Grimes and Stadtler. First they share in the more extreme pleasures of the flesh. Then they escalate to using their victims to understand the human mind pushed to its limits. Back in the present day Eddy and his associate, Spider, begin their journey, weaving their murderous way through the seedy streets of San Francisco.

This book has something for everyone, from demons to returning undead, serial killing, and torture. It’s a smorgasbord of dark delights.  This is brutal and vivid writing, and definitely not for the squeamish. Flesh is cut and splayed, sliced and diced, and plenty of blood is spilled. While the gore is powerful, the characterisations are similarly strong. The main players, Lisa and Eddy, have a complex relationship, but even more minor characters such as the detective, Fenn, and reluctant witness Gulliver, are still well developed.  Gulliver was a very entertaining character, as was the deranged lover and sometimes partner of Eddy, Cherry Hill. 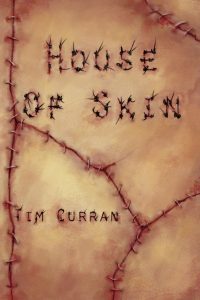 The theme of secret gateways to places beyond the known brought to mind Clive Barker’s works. While the puzzle box opened the doorway to Barker’s hell, the artistry of flesh is Dr. Zero’s key to the Territories – a place for sadists beyond our realm, where entrance must be earned. Both places’ inhabitants share the delight of sweet suffering. These comparisons are a compliment though, and this book is in no way derivative of Barker. Another strong theme is obsession, played out in Eddy’s need to find his father, his and Spider’s fanatical pursuit of entrance into the Territories, Lochmere’s obsession with Eddy, and Cherry’s desire for Eddy. Such obsession rarely brings a positive outcome.

Curran weaves a masterful story, sewing the lives of the different characters together perfectly, like sutures over razored skin. There are plenty of twists that you won’t see coming and it is such a joy as a reader when predictability goes out the window. It all comes together for a suitably climatic finale. This is a thoroughly enjoyable book and I highly recommend it.