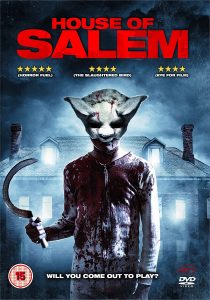 In this feature from James Crow, a group of cockney criminals are employed by a mysterious client to kidnap a young boy in a onesie and bring him to the eponymous house. However, upon arrival they realise that this is no ordinary job; the mysterious gentleman, who’s fond of drinking of wine, is a servant of the Devil and he’s planning a bizarre ritual involving kids. Morals kick in.

The house itself isn’t very hospitable, either. Not only is the residence owned by a Satanic madman, it’s also haunted by ghosts who like to whisper from the shadows and hang out in cupboards. No one would want to spend a night here if they weren’t kidnapped or lured by their criminal greed, so you can imagine how miserable the experience is for everyone.

First and foremost, House of Salem scores points for trying to blend genres. The crime thriller meets occult chiller concept is reminiscent of Kill List and The Devil’s Business, but Crow’s movie doesn’t pull it off. In fact, watching the film will make you wish you were watching either one of those movies instead. House of Salem has a fantastic premise, and there’s a good story in there somewhere, but the film is let down by sloppy editing and a story that feels quite unfocused. It’s not scary or atmospheric, either, and some of the performances are questionable.

At the same time, some of the performances are actually quite good. Leslie Mills and Robert Lowe are highlights as two of the kidnappers, and they could slot into any British gangster movie and do a convincing job. If Guy Ritchie ever watches House of Salem, he might keep them in mind for one of his own upcoming crime capers. Milla has been in some bigger and better things, like Primeval and Casualty, so you know he’s the real deal. Additionally, Jessica Arterton gives an enthusiastic performance that brings some life to proceedings. You can’t fault anyone for giving it their best shot here, though. There’s a desire hear by everyone to make a good movie, and this earnestness makes it difficult to hate.

For all its flaws, though, there’s enough happening in House of Salem to see it through until the end — that’s if you can make peace with the obvious flaws that beleaguer many micro-budget movies. The idea is much better than the execution, but it’s an interesting idea nonetheless and morbid curiosity makes you want to see how events play out. For some viewers, that should be enough to make the whole experience worthwhile.