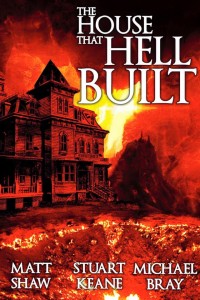 Synopsis:
A group of people have all booked a weekend at a remote Victorian mansion, Berkeley Manor. They have arranged to meet a paranormal investigator, Chester Oxford, to give them a spooky weekend retreat. Over the top Chester is a real showman tour guide, hamming it up for the occasion. He gives them strict rules about what not to do after dark and that includes exploring. They don’t listen.

In this book we have a few interwoven stories recounting incidents from the history of the house to the present day “dark” tourists. One of the most important characters is the house itself. The house is successfully given a sense of grandeur, size, and foreboding. The present day visitors to the house are a mixed bunch and not especially likable. There is a good deal of focus on the struggling relationship between couple James and Lauren. She is trying to save their ailing relationship but he’s an asshole – not really any better way to put it.  He also doesn’t get along with his would-be stepdaughter, Frankie. This foul-mouthed teen is easily the most likable character and provides the only humor with her rants. The rest of the group quickly descend into multiple arguments, which I assume are caused by the dark undercurrents in the house, but it did get a bit annoying.

In another story thread we follow new owners of the house in 1967. The 1967 story is told from the first person perspective of the father, Ben, which offsets the style of the rest of the book. The happiness and overwhelming joy of Ben and his family upon moving in to the manor is in stark contrast to the descent that follows. Ben is a criminal defense lawyer who is haunted by the still-living wife murderer, Rick Jones, who he is to defend in an upcoming trial. The men tied to the house are not what they appear to be.

With authors who normally don’t shy away from splatter and gore, the book seemed a little light on those, until things really hit the fan in the final quarter of the book. Then there is grue and separated limbs aplenty. It was a satisfying story but not as exciting as I’d hoped for going in.