Synopsis:
A hearing-impaired teen with a taste for the macabre starts chatting to a webcam girl operating from inside the former home of a death row serial killer. But the terrible crimes which took place there are not over yet… 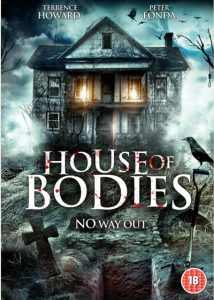 After kicking around online for a few years, director Alex Merkin’s House of Bodies was given a DVD release in the UK this week, complete with some horribly misleading box art. Looking at the DVD case, with its mist-shrouded graveyard outside the titular house, complete with crows and a noose dangling from a tree, you’d be forgiven for mistaking this for one of the dime a dozen haunted house movies so popular right now. Either the marketing department was trying to cash in on this trend, which seems likely, or they didn’t actually watch the movie, which would be smart. In reality, House of Bodies is a dull slasher flick with a crime thriller awkwardly shoehorned into it.

Peter Fonda (Ghost Rider) and Terrence Howard (Wayward Pines) get top billing, despite being almost completely superfluous to the plot. Fonda plays Henry Lee Bishop, a serial killer on death row awaiting execution when Detective Starks (Howard) comes to question him about what appear to be copycat killings inspired by his own. The killings in question involve a group of women offering a voyeuristic webcam service from inside Bishop’s former home, fulfilling their patrons’ every twisted desire, from the expected stripteases to re-enacting the grisly crimes which took place there. Alexz Johnson (Final Destination 3) plays Kelli, a new employee who is uneasy about the whole setup and hesitant to take her clothes off on camera. This changes when she starts chatting with mute and hearing-impaired teen Kyle (Harry Zittel), with whom she forms a quick friendship – and who proves to be her lifeline when a killer invades the house and starts picking off her co-workers.

It was surprisingly difficult to write a cohesive description of this film’s plot, because for most of its runtime, House of Bodies feels like two halves of two completely unconnected films clumsily spliced together. Though there is one marginally clever reveal towards the end, the entire subplot involving the detective questioning Bishop could have been cut from the film, and the whole thing might have been more cohesive for it. It feels as though they only had Peter Fonda for a day, because his appearance is part of a single elongated scene which we cut back to frequently (and often randomly) during the main plot to make it seem as if he’s in it more than he actually is. The tonal shift between these segments is jarring, and the non-chronological storytelling could have been used to much greater effect simply by bookending the film with killer Bishop’s story rather than intercutting it. 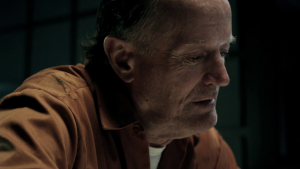 Speaking of Bishop, the film educates us about his crimes by flashing up articles from newspapers with generic names like ‘The Daily News’. We won’t learn much though, considering that the bulk of these articles (after the headline and the first couple of lines) is not written in English –the editor makes the fatal mistake of leaving these up on screen long enough that the error is almost impossible to miss. If you’re too lazy to type a short article about your own plot without resorting to filler text, then you probably shouldn’t be making movies.

But as mentioned earlier, Bishop is not the focus of this film. As for the central plot, the idea of a twisted webcam show being recorded inside a serial killer’s former home sounds somewhat intriguing, and a filmmaker with greater flair might have taken this is an interesting direction. There are a few moments where we glimpse what could have been – despite a lick of paint, many of the rooms still contain chilling reminders of what happened there (scratches on the walls, bloodstains). We’re told that the site’s owner doesn’t just do it for the money but genuinely loves the place, and has kept her room as authentic as possible. Unfortunately, these moments are all too few, and we spend most of the runtime in Kelli’s girly and brightly-lit bedroom. Teddy bears and fairy lights – the horror!

And yet, the movie does have one saving grace, and this is the bond which forms between Kelli and Kyle. Their relationship, however fleeting, is genuinely sweet. It’s a shame that neither character had any chance to grow – hints of Kelli’s financial difficulties and Kyle’s loneliness and nervousness about communicating verbally are never touched upon again after being brought up once. But after a dreary start, the film does pick up as soon as the pair start chatting, and I only wish their relationship had had a more satisfying conclusion than where the movie abruptly decides to end.

House of Bodies is forgettable slasher fodder. Big names like Fonda and Howard, along with Queen Latifah (who was also an executive producer on this dud) are wasted in their brief appearances, and the younger actors struggle to have any presence in a plot which ends up buried beneath extraneous scenes. If you can sit through the bad editing and horrible music choices, there are a few glimmers of something interesting hiding in this junk pile. The director has publicly decried the final edit on Twitter, claiming it was ‘radically changed’ from what he intended, and I can believe that to be true. There’s a better film lurking beneath all the dead weight.