Michael Aguiar’s thriller After Hours is a short film currently doing the rounds on the festival circuit. Telling the story of Detective Harris, a policeman called to the scene of a murder under mysterious circumstances, After Hours injects strong moments of horror into what can only be described as a condensed episode of Criminal Minds.

As director Michael Aguiar has delivered a short that has all the makings of a solid thriller but sadly over-stretches the mark where its Giallo influences are concerned. It’s opening scene serves as a brief but formulaic game of hide and seek and plays up to all the usual horror tropes and could have gone a long way to set a dark tone for the rest of the film. But in their execution, Aguiar fails to develop a sense of dread or urgency. 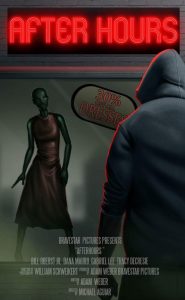 Leading the rest of the film is Bill Oberst Jr who plays Detective Harris. In this role, Oberst Jr flexes his acting chops as the concerned Detective working through the limited clues available to him. His performance is okay at best and he delivers everything needed to carry the film through to the film’s climax. However, the main criticism I have about this short is that it sells itself short by not having enough of its genre elements.

Speaking of which, After Hours did surprise me with its ending but not necessarily in a good way. Make no mistake, I did appreciate what Aguiar is attempting to do here but Adam Weber’s script seemingly attempts to condense a 90-minute feature into a 13-minute short making the project feel wholly rushed and this is the reason why the short doesn’t quite pay off in the end.