The UK horror film of the moment is Comedown, which follows six friends, who break into the London tower block they lived in as children, now deserted and condemned, to rig-up a pirate radio station, get high and party. When one of the group goes missing, her friends begin to search the dark interior of the tower and soon realize that they are not alone: a resident psychopath lurks in the shadows and is hunting them down, taking them out, one-by-one.To celebrate the UK DVD and Blu-ray release of Comedown on 11th March 2013 we have scoured the murky world of cinematic deaths to bring you a list of the most memorable deaths in film history…

We all know the risks of sun beds but when Death has a score to settle, sun burn becomes of little concern. In the wake of a catastrophic rollercoaster accident and lucky to be alive, Ashley and Ashlyn of Final Destination 3 take an ill-advised trip to the tanning salon. Once the beds’ temperature exceeds 350 degrees, the light bulbs pop, skin bubbles, and the girls are covered in relentless flames! 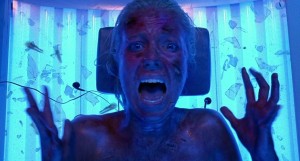 Jigsaw is already dead but it’s still one of the most nauseating scenes in a horror movie that you’ve come across in a long time. You can hear every sickening squelch and squirt as pathologists cut into the late serial killer’s temples and peel his face backwards over his skull…

One of the most disturbing massacres shot for a horror film, Ghost Ship’s opening scene sets the mood for the rest of the film by slicing a large group of well-to-do cruise ship patrons in half. 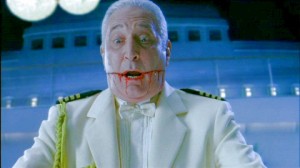 The Hills Have Eyes

The Hills Have Eyes is a 2006 action horror film and remake of Wes Craven’s 1977 film. It follows a family which become the target of a group of murderous mutants after their mobile home breaks down in the desert. The Hills Have Eyes is one of the most disturbing films you will ever watch, with more than one gruesome death scene. 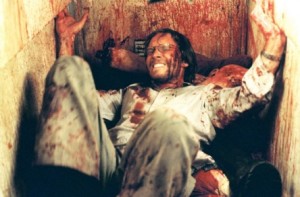 This American thriller starring Brad Pitt is about partners David Mills and the soon-to-retired William Somerset; two homicide detectives who become deeply involved in the case of a sadistic serial killer. They soon realise that this killer meticulously plans his murders to correspond with the seven deadly sins of the Bible: gluttony, greed, sloth, wrath, pride, lust, and envy. The most cruel death scene is when Detective Somerset opens the killer’s parcel, and recoils in horror at what lies within… 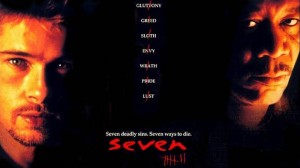 In the original Nightmare On Elm Street, a young Johnny Depp makes his film debut as the heroine Nancy’s boyfriend, Glen. After their friends, Tina and Rod, become Freddy’s first victims, and Nancy struggles to make all the adults believe in their dreams, Glen succumbs to sleep deprivation and he falls asleep in his bed with his mini TV on his lap, listening to headphones. Who could forget Johnny Depp being sucked into a hole in his mattress only to be spit back out as blood and guts onto the ceiling? Luckily for him his characters now live a bit longer in movies! 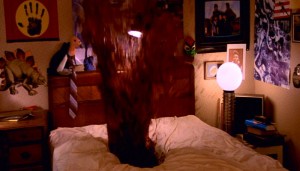 The Saw franchise is well-known for its gruesome death scenes and one of the most simple and most effective is the Venus Fly Trap which crushes the victims head between a mask of reinforced steel and nails. Failing to locate the key to unlock the device, actually embedded behind his eye, within the allotted 60 seconds, victim Michael dies a particularly painful death. 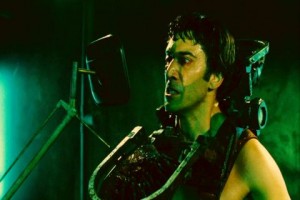 In this scene in Teeth, Dawn finds herself being sexually assaulted by a member of her pro-virginity group, who doesn’t listen to her pleas for him to stop. Unhappily for him, he doesn’t realise that her vagina has teeth! 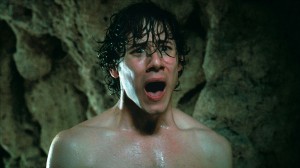