Horror Western Kill or Be Killed Looks Grimy and Beautiful 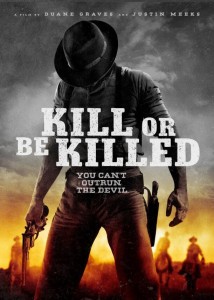 Hot on the spurred heels of last year’s critical hit Bone Tomahawk comes Kill or Be Killed, the newest horror western in town. Shot in Texas, by Texans, the film has played at three of the Lonestar State’s coolest fests ahead of a wider US release on 1st March. It also makes full use of some beautiful, desolate local scenery, as this trailer shows.

Kill or Be Killed is directed by Duane Graves and Justin Meeks, the team responsible for The Wild Man of The Navidad and Butcher Boys, and stars Tina Rodriguez (Inglourious Basterds, Machete), Pepe Serna (Scarface) and horror legend Michael Berryman (The Hills Have Eyes, The Devil’s Rejects). Also appearing is Andrew Sensenig (We Are Still Here), who starred in not one but two Texas-shot films premiering at last year’s Dallas International Film Festival – Kill or Be Killed and Don’t Look in The Basement 2, in which he gave a hugely impressive and evocative performance. Meeks himself plays gunslinger Claude Barbee, named after a real life outlaw who fled Texas after killing a Deputy. He was captured but escaped, fleeing to California where he lived until his death in 1949.

Kill or Be Killed’s official synopsis reads as follows:
In the autumn of 1900, outlaw Claude Barbee puts his ‘retirement plan’ in action [sic], attempting to lead his train-robbing gang across Texas to recover a cash stash hidden after a botched railroad heist. They soon discover they’re being hunted by more than just the law – but rather a merciless, unexpected evil quite possibly greater than themselves.

This looks to be one worth getting excited about, it’s just a shame they opted for such an uninspired title over the way cooler original title of Red on Yella, Kill a Fella.