Las Vegas is a place rich with inspiration for Hollywood. It’s the city that has it all, the luxurious hotels, major casinos, dazzling entertainment, and numerous attractions. However, while there have been many amazing movies set in Vegas, there has been a clear lack of quality horror set in the city. Certainly, there’s no equivalent to Ocean’s 11 in the horror scene. 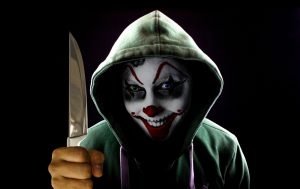 Still, there are some horror flicks that have called Las Vegas their home. Oddly, few movies set in Sin City are really set in a casino despite the ideas to be plundered from a casino location. Below is a list of what are probably the most prominent horror movies that have been set in the glitz and glamour of Vegas.

No, Show Girls is not one of them.

Hostel III
Like most horror film franchises, the Hostel series is a case of diminishing returns through each instalment. While the first (2005’s “Hostel”) movie helped define the torture porn genre, by time Hostel III dropped in 2011, the series was already past its sell-by-date. However, if you liked Hostel and Hostel Part 2, there’s a good chance you’ll like Hostel III. In other words, it delivers on the gore and violence associated with the first two movies. Set in Las Vegas, the movie plays a little like a horror version of The Hangover… if The Hangover had people with their faces being cut off.

Leprechaun 3
Another example of diminishing returns is Leprechaun 3. Never particularly inspired from the start, by the time the Leprechaun series landed in Las Vegas for its third instalment it was all out of ideas. That said, Leprechaun 3 fully deserves its position as a cult classic. It is crazy, plays off the Vegas setting well (Elvis anyone?), and tries but mostly fails to be funny. Star Warwick Davis loves the movie and it somehow became the best-selling home video release of 1995. Good? No, but worth a watch anyway.

Resident Evil: Extinction
Well, this is awkward. Here we have another third instalment of a series that chose Las Vegas as its setting. Once again, we also get another movie that is a poor effort. Of course, it would also be fair to argue Resident Evil: Extinction is not really a horror movie, but it has zombies and monsters, so we’ll run with it. It is worth noting Extinction is set in Las Vegas, but this is an apocalyptic version of Sin City. With most of Vegas buried under sand, we don’t really see the familiar sites of the Nevada city.

Vegas Vampires
Finally, a standalone movie. Directed by the legendary Fred Williamson, Vegas Vampires is a disaster. Still, if you’re developing a vampire movie, Las Vegas is an ideal location. The 24-hour city would make it easy for a vampire to feed each night. In terms of Vegas Vampires, the city serves as a buffet for a group of vampires who visit the city and cause chaos.