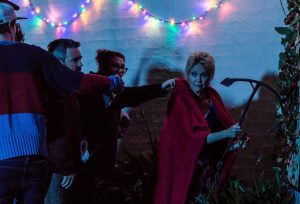 Horror Movie: A Low Budget Nightmare is a documentary that follows the trials and tribulations behind the making of Craig Anderson’s festive horror film Red Christmas.

Director Craig Anderson is a man who has forever dreamed of making a horror film. Now in his thirties, Craig decides that now is the time to make that dream come true. He scraps in his job in television- for now, anyway – and begins the long and tiresome journey of making Red Christmas; a film that follows a deformed man who seeks revenge on the mother who tried to have him aborted.

It’s rare to have a documentary focusing on a largely unknown film; if you think of some of the greatest horror docs out there your mind will wander to Nightmares in Red, White and Blue, Room 237 or perhaps the Hellraiser and Hellraiser II documentary Leviathan. Instantly, Horror Movie has a hurdle in itself: who is really going to watch this? Sure, Red Christmas has somewhat of a cult following, but how many will be interested in seeing how this film was made?

As this film will be catering to the few, it is without the pressure that comes with documenting something hugely well-known. It can do what it bloody well wants, because there are no rules here. Horror Movie wants nothing more than to show you what it’s like to make a film when you have very little money and, on that front, it wholly succeeds. We’re shown as Craig’s budget for the film increases beyond his means and the sacrifices he has to make to ensure the film is made; from asking his brother for money to, literally, draining his own bank account, we’re shown that Craig is willing to give financially everything to this project. The events are candidly captured on camera and even the more contrived moments carry a sense of honesty.

Craig himself is a down-to-earth subject and he is unafraid to display his naivety. He frequently finds himself in too deep and over his head in the commitments that come with making a film. He is never painted as a champion or portrayed as someone that over-comes the odds to pull off something incredible; he’s just a normal guy. But, he becomes a regular hero – a man whose determination and passion for a project helps make it happen – with the help of his friends; the cast and crew. Dee Wallace describes feeling like she was part of a family making Red Christmas and, seeing it from this perspective, we truly believe her. No rock is left unturned and it truly feels like Craig wants to share everything with his audience. There is an intimacy that makes it impossible to not be engrossed. With Craig’s emotional one-on-ones pulling at your heart strings, you might find yourself garnering a whole new respect for this controversial festive feature.

Horror Movie goes beyond documenting the monetary pressures that come hand-in-hand with making a film to become a touching, moving and sensitive feature. It packs quite the punch. It’s fun and it’s ridiculously hilarious in parts, but this film also has a huge heart. A particularly powerful section of the film focuses on the film’s star Gerard Odwyer who has Down’s syndrome. He explains that he wants to be seen for more than his illness. However, the film doesn’t feel like it’s preaching to us, because Gerard’s words are his own. They are as natural as his tears during the Red Christmas scene when he realises Cletus was aborted because he too, had Down’s syndrome. Much like the film-making process, Horror movie is a roller-coaster of emotions where it is achingly funny one minute, and then heart-breakingly emotional the next. 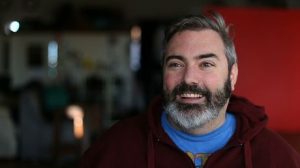 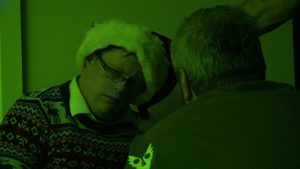 The sadness never lasts and before long, we’ll be back facing the film’s real central problem: hiding a real umbilical cord from Dee Wallace. The umbilical cord becomes a running joke within the film and a symbol of just how far Craig is willing to go to make this film as good as it can be. Sure, it’s later admitted that the effects team could have probably whipped something up, but that’s not the point. The comedy moments in this documentary are needed, because otherwise it would have been one hell of a depressing 100 minutes. From Gerard’s watching of Adult films on set to Craig’s dad taking Dee Wallace to McDonald’s, believing them to being best friends and later nabbing himself a role in Red Christmas, there is plenty to laugh at between the film’s more sentimental moments.

Even if Red Christmas was not your cup of tea, I challenge you to not be drawn in by Horror Movie’s heroically frank tale of, mostly, un-success. It’s a brutally honest look at what it takes to make a film when you’re almost a complete novice and paints the film-making process as what it is: bloody difficult. The to-and-fro between sentiment and hilarity helps Horror Movie stand out and secure itself as essential watching for horror fans and budding film-makers. From beginning to end, Horror Movie: A Low Budget Nightmare is a real delight to watch.