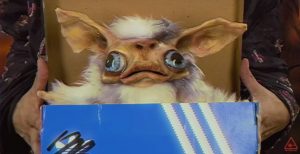 Remember first seeing Gremlins as a kid and desperately wanting a real-life Mogwai for yourself? Yup, me too, but you’re unlikely to be quite as enamoured with a ‘Mischief Cat’.

Those good folks over at Nerdist have put together a hilarious Halloween treat for all the Gremlins fans out there (and who among us isn’t?), in the form of this spoof ‘Groblins’ trailer.

As well as being the best horror spoof fake trailer type thing I’ve seen in ages, the short stars a crop of genre greats. Scream fave Barbara Crampton (Re-Animator, From Beyond, Beyond the Gates) is on damn funny form, as is Gremlins’ Billy Peltzer himself, Zach Galligan. Michael Berryman (The Hills Have Eyes, The Devil’s Rejects, Deadly Blessing) appears as the ghost of Billy’s Grandfather, while Corey Feldman (The Lost Boys, Friday the 13th Part IV) plays the yelling sheriff. Playboy’s Lindsey Pelas also joins the fun as the world’s least believable doctor. 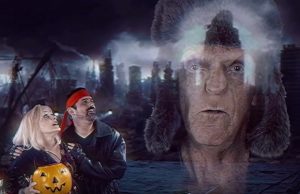 Employing ridiculous puppets and some brilliantly dodgy green-screen, the video could act as a warning of what could happen if the long-rumoured Gremlins 3 went seriously wrong.