The epic annual horror film festival FrightFest is returning this summer to London’s Cineworld Leicester Square and the Prince Charles Cinema, and we’re extremely excited. The monstrous schedule was recently announced and it showcases the, once again, varied and promising set of films that will be gracing the festival. 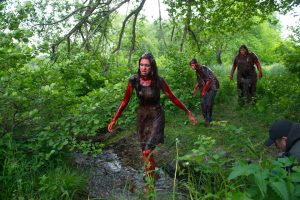 From the global premiere of fan-fave Cult of Chucky and the Texas Chainsaw Massacre prequel Leatherface, as well as European Premieres of Mickey Keating’s Psychopaths and the long-awaited To Hell and Back: The Kane Hodder Story, Horror Channel FrightFest is the place to be to nab those first-look watches.

Additionally, the festival features films from across the world, including the outback shocker 3rd Night, the Welsh sci-fi horror comedy Canaries, the Spanish remake of the cult favourite Inside and the Austrian Cold Hell.

It Stains the Sand Red will offer post-apocalyptic frights, Attack of the Adult Babies will showcase Dominic Brunt’s latest sexy shocker and film for the ages, Game of Death, will blend Jumanji and Battle Royale.

There will also be a never-before-seen version of the slasher Hatchet to celebrate the film’s 10th anniversary and a host of showcases that offer the best in short films, as well as, The Duke Mitchell Film Party, which promises to fill the FrightFest screen with madness, sneak previews and special guests.

Horror Channel FrightFest’s line-up features plenty more than this, so click here to see the full line-up. The festival runs from 24th-28th August 2017, so we’ll see you there!