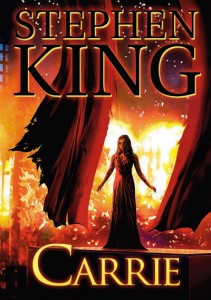 We all know Carrie. We’ve read the book. We’ve seen the movie. We’ve seen the sequel (or the parts we could bear), we’ve even seen the not one, but the two remakes. Some of us may have even seen the musical (Google it!). After all these years, it’s almost as if we took Carrie to the prom. Even though we’ve seen her reincarnated time and time again, the fact remains that Carrie White is not only a literary icon, not only a horror icon, but most importantly a character so prominent in pop culture that her image drenched in blood is worldly recognizable to people of all generations.

The year 2014 should be important to Stephen King fans, both casual and serious ones alike as it’s the 40 year anniversary of Stephen King’s professional writing career, and it all started with a girl named Carrie White. You know the story, so I don’t have to explain much to you. But in case you were born on Mars… It’s the story of a girl who’s the high school outcast. The sheltered daughter of a religious nut who discovers her telekinetic powers and who unleashes them on the peers and bullies who pull a vicious and elaborate prank on her.

We’ve all known a Carrie, some of us might have even been her. Stephen King happened to know two girls growing up who became the inspiration for Carrie White, a fascinating account he explains in the introduction to this special 40th anniversary edition by Cemetery Dance Publications. The folks at Cemetery Dance took special consideration with this first book in their series of republished “Stephen King Doubleday Years” editions. Not only are they master craftsman at producing fine limited edition volumes of horror, they’re huge Stephen King fans themselves so they wanted to do it right.

This beautiful limited edition comes in three states ranging from $85 to $1,000 and features six new color interior paintings by Tomislav Tikulin. The icing on the cake however might just be the introduction by Stephen King and the afterward by Tabitha King who was instrumental in the birth of Carrie as she fished the first typed pages out of husband Stephen’s trash can. That’s all explained in these pieces as well as lots of other neat bits of facts and history. “Who’d ever have guessed so much could come out of some girl having trouble with her period.” – Tabitha King

If you can afford it, don’t pass up this edition. A classic story only the King could tell produced by the finest architects of horror volumes today. 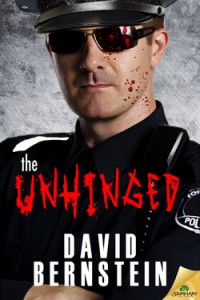 “Wow” is the first word that comes to mind when turning the last page in David Bernstein’s The Unhinged.

We’ve all seen and read the corrupt cop story before. Stephen King did it with Desperation and some might recall 1988’s Manic Cop. There’s just something about cops that can scare people. Putting your trust and need for protection in the care of someone who can ultimately hold your life and fate in their hands. Aaron Dupree, recently released from prison for a mistake he made as a young man, is on parole and is turning his life around. A new job, a new girlfriend, things are really looking up for him. That is until he’s pulled over for speeding and meets Kyle, a cop that decides to make Aaron’s life a living hell.

Aaron’s life quickly spirals out of control as the cop offers up blackmail and violent tasks for Aaron to complete in order to avoid jail time. For Aaron, the sound of a jail cell closing is more terrifying than the horrors he’s forced to execute.  What starts out as an homage to the classic quick writing style of Richard Laymon swiftly morphs into an all-out gore fest in the tradition of Edward Lee or Wrath James White. The violence mounts as Aaron’s loved ones are brought into the fold of the psycho cop’s warpath and the voyeuristic reader can’t help but to quickly flip those pages to see what horrors lie next.

If you think you have a comfort zone, leave that at the door because when you think it can’t get worse, it does. If you like your horror gory, then The Unhinghed is for you. Just as Jack Ketchum did with The Girl Next Door and J.F. Gonzalez did with Survivor, the story is a savage one, but an absorbing one. The killings are bloody and the violence is epic, but it’s a story you can’t help but enjoy and finish in a sitting or two.

David Bernstein has gained another fan here with his latest offering, one I would recommend to those with strong stomachs for brutal horror. 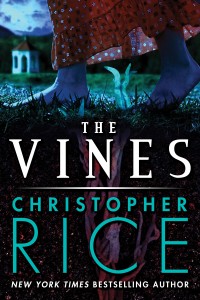 We’ve been lucky to witness the birth of the writing careers of two “children of famous horror writers”. These two writers, grown men now, may have been heavily influenced by their bestselling parentals, but didn’t really need their famous last names to guide them to success. Joe Hill, son of Stephen King, broke out with his first novel Heart Shaped Box in 2007, and he hasn’t looked back since. The author on topic today, from the loins of Anne Rice, son Christopher’s first work debuted in 2000 with A Density of Souls, a favorite of this reviewer.

Louisiana is a setting Rice knows well, and in The Vines, the author pays homage once again to the state in which he spent so much of his youth. Rice writes so eloquently of his beloved south that a trip to New Orleans is desirable after being absorbed in these pages.

In The Vines we are introduced to Spring House, a plantation mansion on the outskirts of New Orleans and its deep lurid history of slave blood spilled on the grounds. Owner and heiress Caitlin Chaisson catches her husband getting down and dirty with a mistress at Caitlin’s own birthday party and then attempts to kill herself in the mansion’s gazebo. The blood Caitlin spills awakens not only the long dead slave era ghosts, but also the book’s main attraction….the vines. It’s safe to assume that mayhem is brewing as this combination of dark forces take hold in the bayou.

This Southern gothic packs so much into a slim 214 pages that it’s almost hard to wrap your head around. We’ve got the man eating plants as well as alien-like bugs, there’s a hate crime/murder mystery that’s central to the plot, as well as a historical ghost story to wrap it all up. While Rice produces horrifying and brain scarring scenes with the vines and bugs, it’s the historical slave ghost story that’s more enjoyable to this reviewer and it leaves you hungry for much more.

Sure, there’s a pleasing creepiness factor to The Vines that will whet the appetite of most lovers of horror, but it’s Rice’s poetic lyricism throughout that will engage you, grab hold of you, hold you down like the man eating vines featured in the book. Christopher Rice proves he is a master of quiet horror. Buckets of blood and gore are not needed when you have the skills to frighten with the swift whispers of a pen.