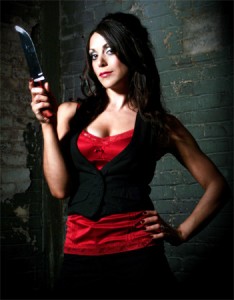 As I dust myself off from the carnage of FrightFest 2015 and attempt to return my now square blood – stained eyeballs back to their former shape and colour, I’m preparing for another onslaught on the senses (as will you be) with a mammoth eleven film premieres showing on Horror Channel in September, so if you’re feeling the FrightFest comedown then stick with Horror, I guarantee we will fill that empty void with enough blood lust to keep you sated, at least for another month…..

With so much to wrap your (eye) balls around here are my six top picks of the month.

AMERICAN PSYCHO   NETWORK PREMIERE   SATURDAY 12TH    22.50
Following a decade of consumerist decadence Bret Easton Ellis gave us his transgressive novel American Psycho in 1991 and with it a monstrous human manifestation of greed, lust and 80’s consumerism in the shape of serial killer Patrick Batemen. Set in Manhattan during the Wall Street boom of the late 80s, American Psycho follows the life of wealthy young investment banker Patrick Bateman. A man who’s violent fantasies give way to full blown murder and torture as his need to fill the empty void he feels inside takes increasingly gruesome forms. The ever intense Christian Bale stars in what is quite possibly his career defining moment as the manipulative suave and chilling Batemen. Nihilistic, disturbing and somehow comical – this controversial film is not to be missed.

SAW V    NETWORK PREMIERE   SATURDAY 19th   23.00
SAW VI    NETWORK PREMIERE   SATURDAY 26th   23.05
Saw practically invented Torture Porn and each year a new SAW film was released the audiences lapped it up in their millions. The key meathook here for die hards was of course the traps. The sheer inventive yukky torture methods Jigsaw forced upon people he deemed ungrateful for their life. He does sometimes have a point. I won’t go into story here, needless to say in SAW V and VI, Jigsaw is actually dead (not a spoiler seeing as he died at the end of number 3) but his work carries on via his protégés, and his master plan is still in motion even as he lies 6 feet under.

Saw V sees Jigsaw take the form of Kramer’s protégé Mark Hoffman, who places 5 seeming strangers in a hideous game to test their will to survive, and though Agent Strahm is on to him, little does he know Hoffman is laying a trap for the detective to fall right into…..

SAW VI was received even better than SAW V as John Kramer’s back story comes full circle and all the pieces of the puzzle really do come together as we learn what Jigsaws true intention and master plan was all along. Let’s just say Insurance men really do get what’s coming to them! Welcome to Horror Jigsaw…..

INBRED    UK TV PREMIERE       FRIDAY 25th       22.45
Of course I have a huge place in my heart for anything ‘Alex Chandon’ seeing as he gave me my first break in Pervirella, then another role in Cradle of Fear and finally a cameo in his brilliant gore-tastic Inbred which I did when I was 5 months pregnant though you can’t really tell as we covered it up (though I felt guilty for my unborn baby doing all that screaming! She seems fine tho…)

Starring ‘This is England’s’ Jo Hartley two social workers and their four deviant youths head to the darkest corner of the Yorkshire countryside for a developmental weekend but it seems the locals really don’t like outsiders in any way and will go to extreme measures to keep them out, having bloody fun in the process! This is a bit of Deliverance mixed with Texas Chainsaw Massacre stamped with that Yorkshire hospitality. The locals have their very own form of sick entertainment and our 6 outsiders are about to star in one very messed up circus of horrors.

AFTER.LIFE    NETWORK PREMIERE    SUNDAY 20th   21.00
Starring a menacing Liam Neeson and goth girl fave Christina Ricci this is a glossy star packed horror with a stylish minimalist feel and high concept plot. Following a car crash Anna (Ricci) wakes up on a morticians lab with a sinister funeral director Elliot (Neeson) preparing her for her goodbye party so to speak. Feeling very much alive, is Anna caught between life and death needing a little guidance to make her final journey to the other side, or is Elliot a twisted sicko with intentions to bury her alive?! Strange surreal sexy stuff.

CATACOMBS    NETWORK PREMIERE    SATURDAY 5th   22.50
Strange casting here see’s popstar Pink (Alecia Moore) star alongside the stunning Shannyn Sossoman (The Day, The Order) as two sisters heading to a party in Paris, the kind of party Pink says ‘changes your life!’ It certainly will with it being held 100 feet beneath the streets of Paris in the city’s forgotten crypt of the dead where millions of the unwanted dead were buried centuries ago. It doesn’t help that there’s been whisperings of a man, born from a satanic cult and fed raw meat is still lurking in the catacombs today…..

With five more brilliant film premieres to behold in September you really are going to be rather busy this month! Here’s what other gore is in store….

DARK FEED, a UK TV premiere about a film crew who descend into madness inside a mental asylum Friday 4th, 22.45.

THE DEVIL’S TOMB, starring Cuba Gooding Junior and Ron Perlman in an action horror of biblical proportions; a network premiere Friday 11th at 23.00

PERNICIOUS set in beautiful Thailand see’s 3 girls releasing the angry spirit of a girl murdered in the name of black magic; A UK TV Premiere Friday 18th 22.45 and finally