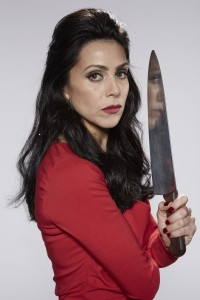 All your horror cravings can be sated all in one place, and I’m the horror host with the most to give you the low down on all that’s bad and bloody this month – right in your living room on Horror Channel…

As most of you know we like to spread our claws far and wide and always have a vintage movie or two to enjoy alongside our more contemporary offerings, and with that in mind here are my top picks of the month both classic and modern.

His last movie, Cherry Tree opened Frightfest 2015, but David Keating was dabbling in witchcraft and folky frights way before this with the reborn Hammer Films movie WAKE WOOD (2009) I think young Keating has a thing for Earthy female horror….

WAKE WOOD Network premiere Saturday 30th April 22.50
Tugging at the heart strings of every parent, indeed anyone with a pulse, comes a horror driven by that rawest of emotions; grief. It is said no one should have to bury their own child, but in this instance, that burial is about to be reversed. Parents grieving the sudden and violent death of their daughter at the hands of a dog move to a small Irish village for a new beginning, but one night witness a very sinister secret ritual at the hands of local … (Timothy Spall) when he offers the desperate parents the chance to bring their daughter back from the dead for three days, how can they refuse? Impossible decisions with terrifying outcomes, for when is dragging someone back from their grave like this ever a good idea with no consequences?! You see, there are rules that must be abided when you twist the laws of nature lest the dead return not quite how they left…

WΔZ Network premiere Friday 22nd April 22.50
I remember 2007 fondly, it was my first year working for Horror Channel and my first big assignment. Reporting at the UK’s biggest horror film festival FrightFest in Leicester Square. My life changed! One of the movies that stood out for me as a refreshing change from the usual slew of killer thrillers and slashers was WAZ (‘W’ ‘Delta’ ‘Z’) directed by The Children’s Tom Shankland. Here morality meets maths in a grizzly serial killer thriller, were it an equation itself it would be SAW plus Se7en minus I Spit on Your Grave. Two detectives must unravel a macabre series of murders where the mutilated tortured victims have the equation WΔZ carved into their skin. When they realise the formula equates to the choice ‘kill your loved ones or be killed’ they must find a killer traumatised by a similar ordeal. With an amazing cast including Stellan Skarsgard, Melissa George, Tom Hardy and Selma Blair this is definitely one to get your head around.

THE LEGACY Network premiere Saturday 16th April 22.55
Now one for all you lovers of vintage celluloid. The 70’s seemed to go hand in hand with Satanism, hardly surprising with America still reeling from the Manson murders in the summer of ’69. With Roman Polanski gravely affected by this (his very pregnant wife Sharon Tate was murdered by the Manson family) his consequent Rosemary’s Baby has forever more influenced horror cinema and the morbid fascination of Satanic cults. Which brings me on to my next choice for April; The Legacy starring Katharine Ross and Sam Elliot. A lighter affair this movie does not delve into the horrors of conception via Satan’s seed, but rather a more intriguing mystery centered around a dying millionaire in a huge mansion with 6 strangers invited to inherit his ‘Legacy.’ One of these people however is Margaret Walsh (Ross) unaware that she has been manipulated and lured into this lair because she is the one that he really wants…! Bit of trivia for you, real life couple Katharine Ross and Sam Elliot met and fell in love on the set of this film, so it wasn’t all bad!

HOUSE ON HAUNTED HILL (1999) Network premiere Saturday 9th April 22.50
Next up comes a real roller-coaster ride of a horror in the remake of a fun 50’s classic from cinema auteur William Castle. HOUSE ON HAUNTED HILL see’s six strangers invited to a novel birthday party for the wife of an eccentric fun fair maker. They decide to hold the party in a notorious abandoned asylum with the chance to win one million dollars if they can survive the night! Only the guest list seems to have changed and you’re never quite sure who really is pulling the strings as the games begin! With Geoffrey Rush and X Men’s Famke Janssen.

CONTAINMENT UK TV Premiere Friday 15th April 21.00
What would you do if you woke up one seemingly normal morning to find yourself locked inside your own home with no water, no power and no explanation while doctors in hazmat suits can be seen decontaminating the neighbours?

Paranoia is played to perfection in a tightly written British thriller from director Neil Mcenery-West who takes us on a claustrophobic journey through a council estate during a state of lock down. An unlikely group of strangers must work together not only breaking down the walls to escape their situation – but also break through the illusion that ‘all is well and to remain calm’ as dictated by a sinister broadcast. It seems we really are powerless in the face of authority.

SATAN’S SLAVE Network premiere Saturday 23rd 22.45
Regular FrightFesters will perhaps know of UK cult horror director Norman J Warren for he still (at the ripe age of 74) loves to attend this festival as well as countless others. He’s such a lovely well-spoken bloke. who’d have thought he’d be responsible for 80’s alien flick Inseminoid, 70’s sex comedy Spaced Out and my next pick of April’s premieres; Satans Slave… We all know good clichés come from somewhere, and in the case of the occult movie, you need look no further than here: Goat mask wearing dudes, conducting ungodly sacrifices with naked ladies, burning witches, blood-letting and more naked ladies. Need I say more of this cult 70’s gem?!

ROADSIDE UK TV Premiere Friday 29th 21.00
Horror films have long had a relationship with vehicular violence, Christine, Duel, The Hitchhiker, Blood Car and Creep Van to name just a few and so comes my last offering for April; ROADSIDE. In the same vein as Phone Booth (2002) this is a bold film set almost entirely by the titular Roadside, drawing upon simple suspense to drive the fear. A young couple pregnant with their first child make an unscheduled night time stop while out on the road, only to be taken hostage in their own car by an unseen sniper, and told that one wrong move could spell death.