Moonshine Productions have just brought their web anthology series Fear Haus back to screens for a second helping, with Fear Haus 2.0.

The selection of horror shorts are curated and introduced by Blair Bathory. The first instalment of Fear Haus 2.0 debuted on January 31st. Read on for all the official details.

“For the past year, Blair Bathory of indie-horror fame and Drew Sawyer, producer and Moonshine Productions post-house owner in Atlanta, have been preparing the return of their original series FEAR HAUS. A spin on the anthology series and horror hosts of the 1980s and 90s, FEAR HAUS presents a fantastic selection of international and domestic short horror films, curated and introduced by Bathory herself.

Last year, Sawyer and Bathory created their ‘fearmaker’ program by bringing in guest directors to conceptualize and produce wrap-arounds for the series. Currently Director Molly Coffee and the Canadian creative powerhouse Luchagore Productions, with Director Gigi Saul Guerrero at the helm, have created 6 episodes each. 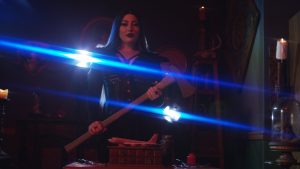 Sawyer and Bathory are creating a “hub for horror” within the already burgeoning film industry in Georgia. With new episodes weekly, the intent is to create feature length projects under the roof of their FEAR HAUS. Beginning with a film from Scottish Director, Andy Stewart, FEAR HAUS will release its first episode of the year on Wednesday, January 31st.”