Comedy horror Chopping Block has a US disc release set for August 30th, through LC Films. It will also be available on Vimeo on Demand, with a VOD release planned for later in the year.

The film, which sees a group of disgruntled ex-employees getting in way too deep when they hatch a revenge plan against their former boss, is written and directed by Joshua Hull. Check out the riotous trailer below. 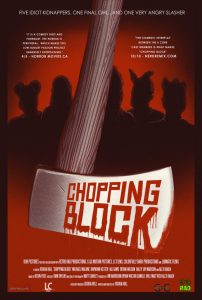