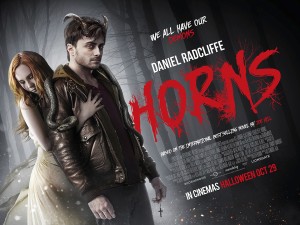 The Times Rich List recently showed Daniel Radcliffe, unlike most student debt saddled 20 something’s as one of the richest men under 30 in the UK solely due to the Harry Potter franchise and now he seems to be spending his subsequent career taking roles that are the complete opposite of the wand waving wizard.

His latest departure is the Alexandre Aja directed Horns playing a potty mouthed murder suspect  of his childhood sweetheart. Having become something of a pariah in the town with no one believing his proclaimed innocence after one drink-fuelled evening he wakes up, like most young males, with the horn. Or two to be exact.  And they’re on his head. With the horns growing ever more prominent he finds them a blessing more than a curse as they render people incapable of lying and being brazenly up front in voicing thoughts they’d normally keep to themselves as he goes about trying to find out who really killed his girlfriend. It’s the scenes where people blurt out the truth which give the film some much needed laughs as this is a rather thin tale stretched out over 2 hours and it’s pretty easy to work out who offed his girlfriend.

Aja in the past has served up decent reworkings of Piranha and The Hills Have Eyes but here has taken a slightly different approach to his usual horror output. Nowhere near as graphic as his previous offerings this is more of a supernatural gothic fable using flashbacks to flesh out the tale. It heaps on the demonic imagery ever more obviously as the film progresses and by the end there’s demons and snakes all thrown into the mix and frankly if you’ve a snake phobia the last half of the film especially the ending  is not for you.

With theology writ large throughout the film this attempts to deal with a fall from faith though never really convincingly. Based on the book by Joe Hill who has clearly been influenced by his father, Stephen King’s writing this is diverting and quirky but suffers from being half an hour too long. It’s sure to still attract Daniel’s devotees as he continues to kick against his Potter heritage with another darkly sinister role and it’s refreshing to see him play against and this is very much a star vehicle built around him although it s good to see Heather Graham (whatever happened to her career?) pop up as a wannabe famous duplicitous waitress. For a horror film though there’s nothing particularly horrifying here apart from the running time.