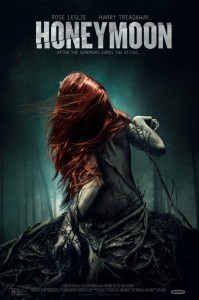 Synopsis:
If newlyweds go down to the woods today they’re sure of a big surprise

Who wants to go to some sun kissed idyll on their honeymoon when you can spend it in a remote cabin that’s second only to the location used for the Evil Dead films. It’s certainly not one I’ve seen advertised in the window of Thomas Cook lately though its one clearly favoured by the couple featured in ‘Honeymoon’.

Starting with a homemade video of how they met with the groom (Harry Treadaway) dreamily recounting how he spent the spent clamped to the toilet due to some ropey curry they’d been troughing ( who said romance was dead?). They go off to their overgrown back water paradise where they engage in the traditional honeymoon nuptials getting jiggy with Mr Biggy before they’re off on romantic walks and other stereotypical guff.  This makes up a substantial part of the film as we get to know them getting to know each other. All this changes when he finds his new bride (Rose Leslie) standing trance like in the middle of the woods one night with her not knowing or having any idea why she’s done this. It’s from here cracks appear in the relationship with her getting increasingly distant and clearly changed by whatever has happened to her and he spends much of the time struggling to find out what happened to her out there in the woods . It certainly wasn’t a teddy bears picnic but something far worse.

And that’s always the problem with mysteries like this – the answer is nearly always a disappointment which unfortunately is what happens here.  With this being a low budget film this relies on its chills through deliberately paced atmosphere but ultimately veers towards what bizarrely seems to have invaded what Pulp Fiction’s Jules Winnfield would call her, ‘holiest of holies’. There’s a slightly adolescent and arguably even misogynist attitude to what many women go through each month and Leslie spends much of the film in blood soaked clothing.

It’s something of a slow burn until the somewhat rushed answer to the mystery is revealed and first time writer/director Leigh Janiak has been influenced by Austrian director Michael Haneke’s, ‘Funny Games’ and borrowed further and more obviously from the  ‘Evil Dead’ but the two leads are convincing enough as the initially loved up couple and arguably the film is a metaphor for never truly knowing anyone no matter how close you are.

But if the couple have learnt only one thing then it’s not to go back to the same travel agent for their next holiday.