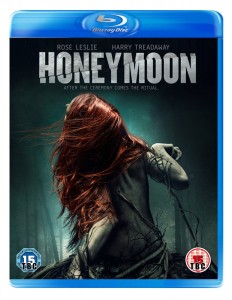 Synopsis:
Newlyweds Bea and Paul drive into the Canadian woods to spend their week-long honeymoon in a house by a secluded lake. All seems perfect until they run into Bea’s childhood friend Will and his wife Annie, whom he treats with aggressive contempt. Paul awakes one night to find Bea missing, eventually finding her naked and confused out in the woods, but is unable to extract any explanation from her regarding her night-time outing.  By the morning, Bea is beginning to forget the simplest details of her life, and has developed strange marks on her legs. Something weird has happened to Bea, and Paul is desperate to find out what.

Tales of marital bliss turning sour have long been a staple of the horror genre, at their best laying down a sense of tragic melancholy underneath the terror, forcing the audience to feel the weight of a love unwinding. Director Leigh Janiak’s debut works admirably towards this aim, with a slow-burning first half in which we join the happy couple as they enjoy each other’s company and the freedom of their week together. The newlyweds tease each other and joke around as Bea gives Paul a tour of the house (where she stayed as a child), her confident and outdoorsy, him more reserved and used to city living. They appear likeable enough, and these lengthy scenes of characterisation never become boring, but there is an extra ingredient which seems to be missing.  A number of cringe-worthy moments and the occasional sense that the two are not entirely comfortable together in the way newlyweds really should be prevents the viewer from fully buying into the relationship. As Bea, Scottish-born Rose Leslie coolly leads the film, and Devon lad Harry Treadaway is a serviceable if unexciting Paul, it just feels as though they are given too little direction. We see none of the sweet, beautiful and crucially, relatable moments their love needs to have in order for the later horrors to really hit hard.

The lack of intimacy between the onscreen couple and the viewer is frustrating because of how confidently Janiak handles Honeymoon’s other elements. A reliance on handheld camerawork and shots that actually seem to be from the house’s point of view give the constant and oppressive sense that the couple are being watched from all angles. This is added to with nicely textured exterior shots and the intrusive positioning of objects in the foregrounds of the frame. Aesthetics aside, Janiak also has no struggles when it comes to creating tension and mood. As Bea starts acting more distant and less like herself the viewer is kept guessing, as desperate for answers as Paul. Answers are withheld though, and the mystery only becomes more deliciously intriguing the more digging he does. And as he searches for answers, horror comes from the most unexpected moments. There is a fantastic scene in which Paul returns to the house to find Bea – unaware that she is being watched – rehearsing lines in the mirror, practising how to sound natural to her husband. Paul had initially thought that Bea’s odd behaviour was somehow linked to her relationship with childhood friend Will, but by this point he is convinced that Bea is no longer the woman he married.

Honeymoon’s greatest strength (and Janiak’s directorial trump card) is in its pacing. The film as a whole unfolds in a very composed and controlled build, escalating to a frenzied and unexpected finale filled with imagery not previously even hinted at. This escalation in pace matches Paul’s increasing desperation and need for answers, and even makes better use of the lead actors’ strengths. The characters become far more convincing, and their tale more tragic, as Paul’s patience is exhausted and he decides to force the truth from Bea.

The slowburn of the film’s opening act hints not at the mystery and otherworldliness which dominates the bulk of the runtime, leading the viewer to expect another film entirely. With its all-too-familiar setup – newlyweds arriving at a secluded location in the woods – viewers could be forgiven for expecting a house invasion or revenge narrative. Indeed, the location itself is frighteningly reminiscent to the setting of 1976 Canadian exploitation gem Death Weekend. When Bea and Paul stumble across Will he is in a fit of rage, appears abusive to Annie, and a little too pleased to see Bea, and it appears we have our antagonist. Janiak has other ideas up her sleeve however, and the paradigm is not what it initially appears.
As one would expect from Arrow films, the Blu-ray’s picture quality is spot-on, giving rich detail to the daytime exterior shots. Extras amount to nothing more than a trailer and a Behind The Scenes, which consists of four minutes of outtakes.

They say the greatest fear is of the unknown and this plays to Honeymoon’s credit, as it stubbornly withholds its secrets from the viewer. Some of the night-time scenes are horribly tense, and are the best showcase of first-time director Janiak’s talents. A more engaging intimacy between the leads could have created a crushing feeling of love lost and made the film something truly special. As it is, it represents a promising debut from this young director, and is definitely worth a watch for its escalating madness and unexpected narrative paths.