Synopsis:
Strange cravings and hallucinations befall a young couple after seeking shelter in the home of an ageing farmer and her peculiar son.

There are some horror premises that have been done so many times it’s challenging to wring any fresh blood from them at all. Director Devereux Milburn proves that it’s still possible with his debut feature Honeydew, the tale of a stranded couple seeking refuge in a stranger’s home that soon takes a hard left turn into strange and unsettling territory.

Things get off to a familiar enough start. Couple Sam (Sawyer Spielberg) and Riley (Malin Barr) are camping in the countryside. After darkness falls, the owner of the land shows up to inform them they are trespassing and need to leave. Naturally, their car won’t start and their phones won’t work, forcing them to trudge through the woods to seek help. A light leads them to the door of Karen (Barbara Kingsley), a seemingly sweet but confused old woman who calls her neighbour to come and fix their car, introducing them to her invalid son Gunni (Jamie Bradley) and offering them a bite to eat while they wait. Insisting, in fact.

Milburn doesn’t wait for the couple to reach Karen’s house before he starts cranking up the discomfort dial. Some unusual scene transitions and a supremely off-kilter score by John Mehrmann signal to us from the get-go that this is not your typical road trip gone wrong. Riley, a PhD student, is introduced as she casually watches a video about a parasitic infestation in the area that spoiled the wheat and led to many people and cattle falling ill, helping to establish a sickly tone that carries right through to the film’s stomach-churning conclusion.

The relationship between Riley and Sam is also extremely uncomfortable to watch. Sam is battling with intense food cravings; Riley, a vegan, has put him on a strict diet after learning his cholesterol is too high. While Sam is healthier for it, he clearly harbours some resentment and lingering body image issues, which isn’t helped by Riley’s smugness or the fact that she frequently speaks for him. But Sam is no saint either, seeming to take spiteful delight in overriding Riley’s judgement whenever he can. 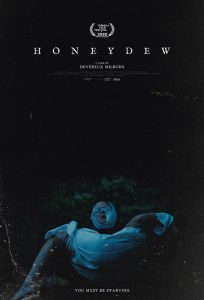 This toxicity, always bubbling just beneath the surface, creates a baseline of tension that only intensifies as the film progresses and the couple is placed in a veritable gingerbread house of temptation, filled with sizzling meats and creamy cupcakes. Kingsley shines in these scenes, never overtly creepy (at least, at first), but instead giving a performance that’s just a little… off. The ever-present humming of Christmas carols and reels of Betty Boop cartoons, combined with Mehrmann’s subtly upsetting sound design, turn her outwardly cozy home into a nightmarish hellscape in which time becomes utterly meaningless. It could be midnight or 6 a.m., but it doesn’t matter: no one is coming to fix to the car.

A sickly fever dream of a movie, Honeydew is an unconventional and unpredictable debut from a director with a lot of promise. It simmers for a long time before reaching boiling point, which may not be to some viewers’ taste—but it’s that willingness to let the audience marinate in the discomfort that makes the shocking climax that much sweeter.