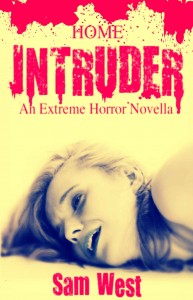 Another novella in the extreme horror category, although I do have to ask how they decide it’s extreme because in most cases, it isn’t what I would call extreme. I mean have they never read Edward Lee or Wrath James White, now that’s extreme and this, well I beg to differ.

Home Intruder starts off catapulting rapidly out of the blocks with the first chapter, our intruder stalks couples who obviously love each other deeply and then intrudes in every sense of the word, torture, rape and impossible choices concerning your loved one are the order of the day. The start has some suitably wincing moments and we then take the foot of the gas a little as our not so friendly visitor stalks a new couple.

Edward and Jazmine Sullivan inherit a seaside property in Cornwall, they make their way down there from London to get the place ready for sale. It’s the house Ed grew up in and they run into his old flame and her boyfriend, a couple of low life’s who force themselves into the picture with offers of a curry and alcohol.

Our Intruder does what he does best, a good bit of intruding and suddenly he’s taken the loving couple and the ex, Linda hostage. Queue a little bit of psychological horror, violence and a continuity error that in a novella just shouldn’t happen. It’s criminal.

Linda who is unconscious at the kitchen table after having her bonce driven into said table is suddenly running off down the hall trying to escape and then after this failed attempt she’s back to her unconscious state. It was of course Jaz who ran down the hall and when she reaches the door, her head is rammed into the fine piece of timber and she is pulled backwards by her hair to land on her back, then dragged by her hair back into the kitchen. Sounds quite painful if you ask me but the guy is a psychopath and this is his chosen occupation. Story cuts somewhere else for a short time and its back to Jaz whose stomach is in agony because of the way she’s been dragged, hang on a minute, what’s going on here, doesn’t sound right to me, she was dragged back like a sack of potatoes and, of course she must of flipped over mid-drag. That’s it, no that’s just wrong up. Didn’t sit right with me at all.

Along with a couple of other small errors, it sort of ruined it a little for me and it was disappointing after such a promising start but errors like that in a piece under a 100 pages are basic stuff. That said there’s some promise here and I think I’ll give Sam West another go, just the one anyway.